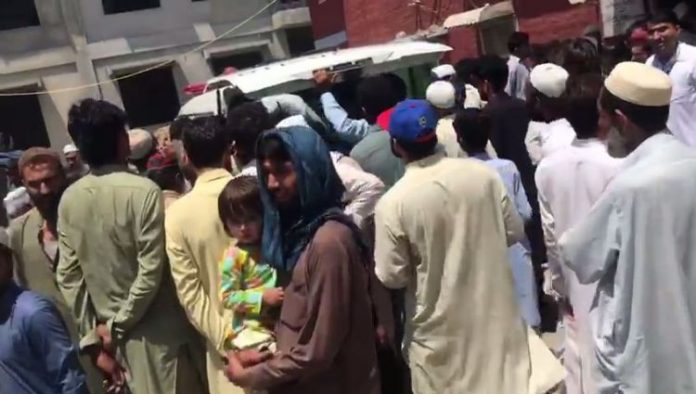 NOWSHERA: One person was killed and six others were injured in a firing incident over a trivial issue in Nowshera on Saturday.

Local sources said a man became furious after children pelted stone at his gate and came out of his house and opened firing. A passer-by Farooq (30) was killed in the firing, while six other people, including children sustained injuries. The injured were identified as 12-year-old Nabeel, 13-year-old Zohaib, 20-year-old Shahrukh, 45-year-old Fazal Muhammad, 27-year-old Abdur Razzaq and 25-year-old Noor Ahmed.

The injured persons were initially taken to District Headquarters Hospital Nowshera from where they were shifted to Lady Reading Hospital Peshawar due to their critical condition.

Police arrived at the scene after the incident and initiated investigation. Policemen encircled the whole village and conducted raids to arrest the alleged culprit. However, no arrest was made till filing of this report.

A man who killed his artiste wife in Banr area of Swat four days ago has been arrested and presented before the media.

On first of Ramazan, accused Shaukat had shot dead his wife Meena and escaped the scene. Swat Police was conducting raids for the last four days and the accused was arrested on Saturday. DSP City Zahir Shah said the couple quarrelled over a monetary issue after which the husband opened fire on his wife.

The SHO of Banr Police Station said further investigation into the case is underway.

One killed, 7 injured in Charsadda incidents

One person was killed and seven others were injured in separate incidents in Charsadda.

Sources said the roof of a house collapsed in Mian Killi area of Shabqadar tehsil due to which 60-year-old Zahir Shah died, while his son Hamid sustained injuries. The local people retrieved the body and the injured on self-help basis and shifted them to hospital.

Meanwhile, a passenger van collided with a power pylon in Subhan Khwar due to which four people, including the driver, sustained injuries.

In another incident in Sheikhu area, a woman and her brother were injured in firing during a robbery attempt.