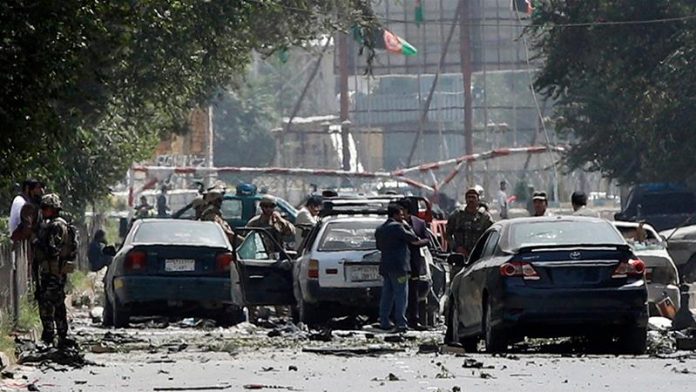 PESHAWAR: In a second major blast in Kabul this week, at least ten persons were killed in a car bomb blast in Shash Darak, a heavily fortified diplomatic area, in the Afghan capital on Wednesday morning. Another 42 persons were also injured in the attack.

Foreign media said that suicide bomber collided his vehicle with the Afghan intelligence agency ‘National Directorate of Security’ (NDS) check post near the US Embassy in Kabul. According to witnesses, the explosion was so loud that its sound was heard far away, glasses of nearby buildings were broken and several vehicles destroyed.

Several important complexes, including the National Directorate of Security (NDS), the Afghan intelligence service, and the US embassy are situated in the area where the attack took place.

Afghan authorities say the bodies and the injured have been shifted to the hospital, where the condition of several injured is reported to be critical that is why it is fear that there can be an increase in the number of casualties.

On the other hand, according to information circulating on social media, Afghan politician Suleiman Leiq was also killed in the attack. Meanwhile, the Afghan Taliban claimed responsibility for the attack, saying the attack targeted a foreign military convoy in which 12 foreign and 8 NDS personnel were killed.

On September 3, at least 16 people and wounded 119, almost all local civilians, just hours after a U.S. envoy said he and the militant group had reached a deal “in principle” to end America’s longest war.

Taliban have carried out the bomb attack at a time, when are in peace talks with the United States. Afghan President Ashraf Ghani said in a statement.”Peace with a group that is still killing innocent people is meaningless.”

Taliban spokesman Zabihullah Mujahid told the media “we understand that peace talks are going on … but they must also understand that we are not weak and if we enter into talks … we enter from a strong position.”