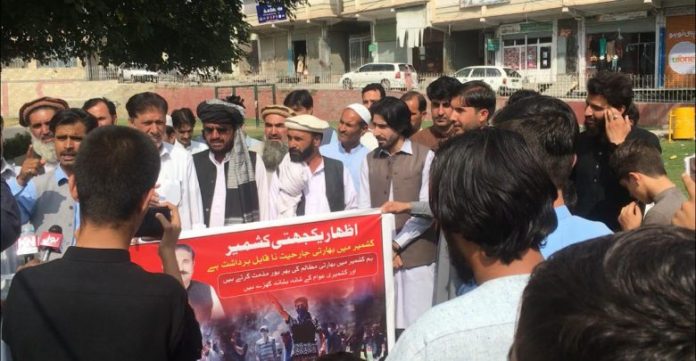 KURRAM: A protest group of 100 tribal people departs from Kurram for Azad Kashmir to express solidarity with the people of Indian Held Kashmir (IHK) on Sunday.

The group of 100 tribal people will protest against the atrocities on Kashmiris by the Indian security force where a curfew has been imposed since August 5. Addressing the protest delegation, before leaving, for Azad Kashmir at Edhi Park Parachinar, social activists Abrar Hussain Jan, Jalal Bangash and Khidmat Khan said that they are going to Kashmir to express solidarity with oppressed Kashmiris and to assure them that the tribal people are with them to get their right of self-determination.

The protest delegation of 100 people from District Kurram will arrive in Peshawar where they will be joined by other people from the tribal districts and will leave for Azad Kashmir under Member National Assembly (MNA) Sajid Turi and parliamentarians from tribal belt.

Since the Indian government repealed Article 370 of its constitution — stripping occupied Kashmir of its special status — a strict lockdown and communications blackout has been imposed in the region. It has now been in place for more than 40 days.

Due to Indian atrocities, IHK has become a flashpoint. On Sunday, Amnesty International launched a petition on its website, urging people to raise their voice against the government-imposed communications blackout in India-occupied Kashmir. Yesterday, Nobel Prize laureate and education activist Malala Yousafzai called upon the United Nations to act and work towards bringing peace to the India-occupied Kashmir territory so that children may safely resume their schooling.