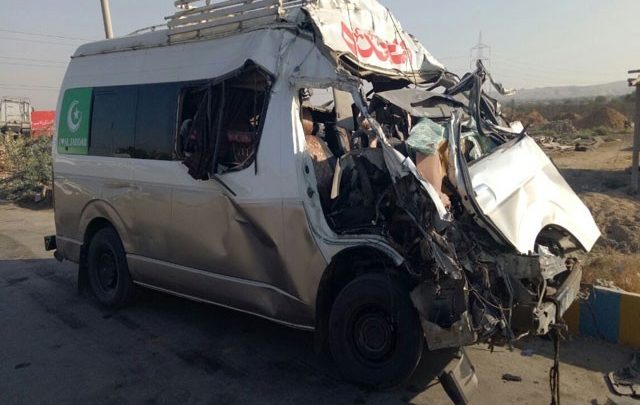 PESHAWAR: At least 11 persons lost their lives and nine other sustained injuries in a traffic accident in Mastung area of Balochistan on Tuesday.

According to rescue sources, a passenger van was travelling from Karachi to Quetta when it collided with a truck coming from the opposite direction at Lak Bypass. The rescue teams arrived at the spot and shifted the injured people to hospital. The injured also included women and children.

Sources said the deceased persons belong to the same family.

Most of such accidents happen due to untrained drivers, reckless driving, poor condition of roads and poor maintenance of vehicles. The regular happening of the road accidents is a clear indicator that most of drivers, particularly those in public transport, are never willing to learn from their mistakes.

At least three more people, including two children, lost their lives, while as many were injured, as flash floods continued to hit different areas of Balochistan on Tuesday.

Heavy rains caused the flash flood in residential areas due to which people are facing many difficulties.

Deputy Commissioner Dukki said floodwater from the Alambar River has entered the Kuli Manzai district and submerged the residential areas after which the local people have shifted to safer locations. In another development, water from the Mankai dam is overflowing after it filled from its limit due to heavy rain.

Harnai district has been cut off from rest of the country as floodwater has submerged the bridge connecting it to the highway. Rains are still continuing in many parts of Balochistan and residents fear of more losses.

Three days ago, four people of a family lost their lives as they were washed away in flash flood in Pishin district.

Levies sources said that 65-year-old Abdul Manan along with his nephew’s son Khubaib (8) and two grandsons, five-year-old Marwan and four-year-old Sufian was going home in his vehicle when he came across a stream which was flooded due to heavy rain. He disembarked from the vehicle along with the children and tried to cross the stream on his own feet. However, all of them were washed away while they were crossing the stream.