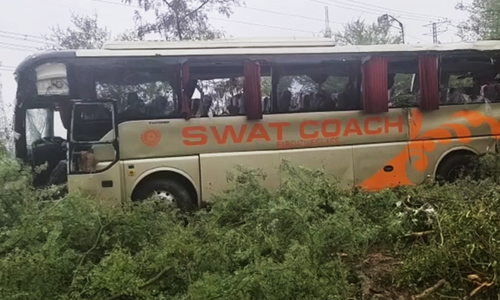 PESHAWAR: In a horrific road accident on the motorway, at least 11 people were killed while 46 others sustained injuries. The accident occurred near Bahtar Interchange on Peshawar-Islamabad motorway when a passenger bus overturned due to overspending and slippery road.

The injured were rushed to Tehsil Headquarter Hospital (THQ) in Taxila and to various hospitals in Hassan Abdal, Wah Cant and Rawalpindi. The THQ Taxila told the media that 10 bodies and eight injured were received at the hospital while the rest of the casualties were taken to other hospitals. The Punjab police officials informed that two of the bodies were yet to be identified.

The police officials said that investigation into the tragic accident is underway, however, they said that initial investigation revealed the over-speeding bus slip out of the road that was already slippery after rains.

Several eyewitnesses have also informed the police saying that the driver was using mobile phone while driving and refused to pay heed to some passengers who asked him not to do so. The driver was also accused of having consumed hashish during while the passenger bus which led to the accident.

Motorway Police have informed the media that deceased belonged to Lahore, Nankana Sahib and Swat. According to the officer, the bus went out of the driver’s control when he was overtaking a trailer. Following the incident, motorway police issued orders to install speed cameras after every 500 metres on the M1 motorway.