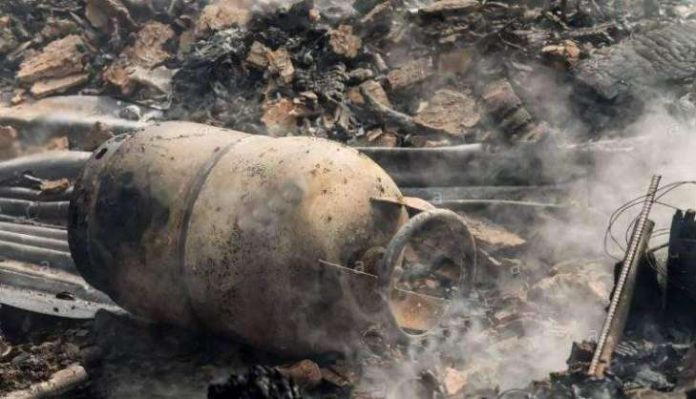 NOWSHERA: Eleven people of a family, including women and children, sustained burn injuries in a gas cylinder explosion in Nowshera on Sunday.

Rescue 1122 spokesman Bilal Ahmed Faizi said a gas cylinder exploded in a house in Shedo Gulbahar area in Jehangira due to which the house caught fire. The Rescue 1122 team immediately reached the spot and after providing first aid to the injured persons shifted them to Qazi Hussain Ahmed Hospital.

The spokesman said the injured included six children, four women and another person. The condition of one of the injured women was stated to be critical.

Officials of Akora Khattak Police Station said all the members of the family were sleeping in the same room. Police said when the women of the house woke up in the morning and lighted the fire, the cylinder exploded due to leakage. The house caught fire after the explosion due to which 11 members of the family received burn injuries.

A 15-year-old girl student died after being hit by an aerial bullet in Nowshera on Saturday night.

Police said the incident happened in the jurisdiction of Risalpur Police Station, where a girl student, Aiman died after being hit in the head by an aerial bullet. She was preparing for her exam and studying in the lawn of her house in Bara Banda village when the unfortunate incident happened. She was taken to Mardan Medical Complex, but she could not survive.

Meanwhile, one person lost his life and another was injured when a motorcycle collided with a truck on the Indus Highway in Karak.

Local sources said a speeding motorcycle collided with a truck due to poor condition of road. One person on the motorcycle died in the accident, while the other was injured critically. The injured person was initially taken to District Hospital Karak from where he was shifted to Lady Reading Hospital.

Most of the accidents in Pakistan happen due to poor condition of roads and untrained drivers. Indus Highway is particularly known for road accidents almost on daily basis.