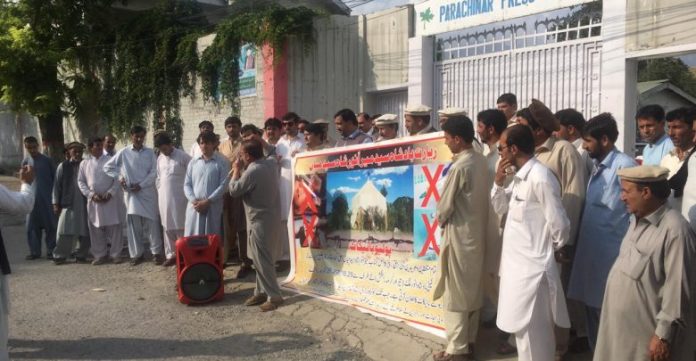 KALAYA: Over 11,000 children in three districts remained deprived of polio vaccination due to closure of the shrine of spiritual figure Mir Anwar Shah in Orakzai tribal district.

The devotees have also started protest against the closure of the shrine since Wednesday. The shrine of Mir Anwar Shah was closed due to law and order issues 20 years ago, which could not be reopened despite return of peace to the area. The devotees following the decision of Mian Anwar Ghag Committee had boycotted the polio vaccination campaign to record their protest against the visit of devotees to the shrine and its maintenance and decoration. The devotees are demanding the government to open the shrine and allow them to do maintenance and decoration at the shrine.

While addressing the protesters, former MNA Munir Syed Mian, Mazhar Hussain, Mahir Hussain and others said Sikhs and followers of other religions have full freedom to visit religious places, while the shrine of Mir Anwar Shah is closed for the last 20 years for devotees. They feared that the shrine might collapse one day due to lack of maintenance. They said the devotees boycotted polio vaccination in first stage of protest, while in second phase they will boycott courts and won’t send their children to schools. They said the government officials will also record their protest.

MNA from Kurram said it is not appropriate to keep the shrine of the spiritual leader closed. He demanded concerned authorities to open the shrine without delay. He also said that boycott of polio vaccination is not a wise move as it is a big risk for the future of our children.