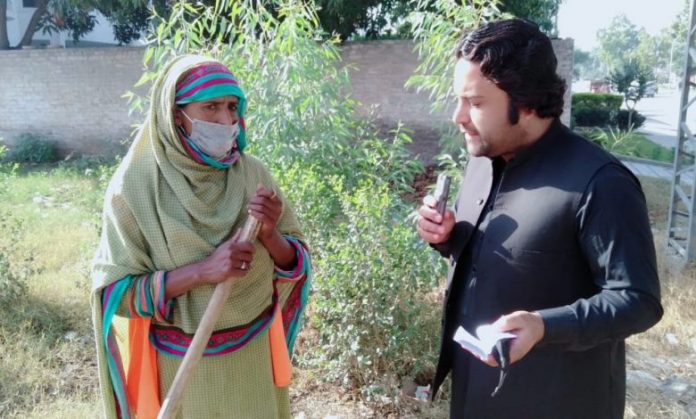 Asim Masih, a Christian sanitary worker has been in work of keeping streets of Hayatabad clean for past two decades.

Even at the peak of pandemic, when entire country had come to grinding halt, Asim used to work from 8am till 2pm every day. On weekend, he used to work for overtime, but never paid the overtime for his work in pandemic.

“The sanity workers were on work even during the pandemic,” Asim said. But as the pandemic started to gain more and more momentum, people like Asim were started to face its crunch.

At one point, it had nearly become impossible for him to pay his bill in his meager salary of Rs 20,000 per month. However, luckily Asim, managed to secure some aid from government and NGOs.

Though the pandemic has disrupted communities all over the world; however, the weak and marginalized like religious and ethnic minorities have suffered the worse blows.

Najma Masih, a female Christian sanitary worker that they are discriminated against. He said that whenever there is something like a pandemic, they are made to work for longer hours.

She said that during the pandemic, Peshawar Development Authority (PDA) provided them with shoes, but did not extend any other help.

Besides minority workers, health workers also suffered the blows of the pandemic. Ramsha Javed, a nurse at the Hayatabad Medical Complex also contracted Covid. Ramsha told TNN that besides trying to spread awareness regarding Covid-19 among general public, she was also sharing her personal experience of the illness with people.

Besides economic crunch felt by majority in pandemic, some also faced food shortages. In this situation, youths came forward and collected donations and provided these people with food rations.

Homi Singh, a Sikh activist from Swat district said that during the pandemic, many a minority families even had nothing to eat.

Mr Singh said that earlier he tried to help the needy with his own money. Though soon he realized that it was not something one can do on his own. So he solicited help from other well-off Sikhs for donations. Besides poor members of Sikh community, Mr Singh also helped poor Muslims with food rations and other necessities during pandemic.

He said that they helped the humanity in the pandemic, which was suffering economically due to the pandemic.

Mr Singh said that family members of Covid-19 patients often faced problems as other people shunned them due to daises stigma. He said at times some patients families had no money to treat to them, so he solicited help from Sikh community members in medicine business to help such people.