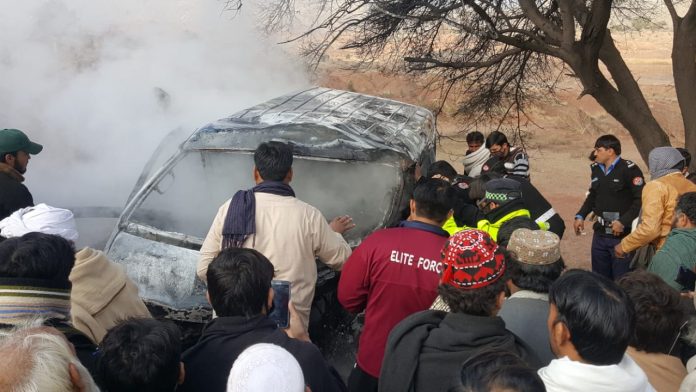 KARAK: At least 13 people died and four others were injured in a traffic accident on the Indus Highway in Karak on Wednesday.

Police said the accident happened in Speena Banda area when a passenger van travelling from Peshawar to Dera Ismail Khan hit a pick up van coming from the opposite direction. The passenger vehicle caught fire after the collision as the gas cylinder exploded.

The local people retrieved the bodies and the injured on self-help basis and police also reached the scene soon.

Officials said the bodies were mutilated in the fire and it was difficult to identify them. The bodies and the injured were taken to District Headquarters Hospital where their condition was stated to be critical. Emergency was declared at the hospital as soon as the incident happened.

Earlier in the day, one person was killed and 10 others were injured when two passenger vans collided due to dense fog in Lakki Marwat.

The injured persons were taken to Tehsil Headquarters Hospital Naurang after the accident. The condition of three injured passengers was stated to be critical.

According to Pakistan Bureau of Statistics (PBS) data, average 15 people die every day in traffic accidents across the country. The data from 2004 to 2013 shows that Sindh was deadliest in terms of average people killed in accidents, followed by Punjab, Balochistan and Khyber Pakhtunkhwa.

Most of such accidents happen due to untrained drivers, reckless driving, poor condition of roads and poor maintenance of vehicles.