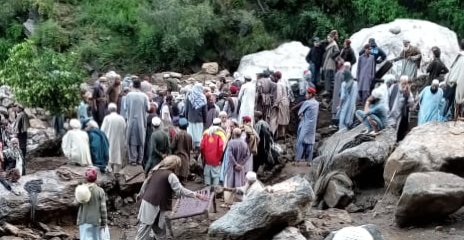 TORGHAR: In a tragic turn of events, lightning struck two houses in Jhatka area of Jadba tehsil in Torghar district which also triggered landslide, killing at least 14 people and injuring two others.

Local sources said that during the heavy rain late on Saturday night, lightning fell in Jhatka area which triggered landslide due to which two houses owned by two brothers collapsed.

As many as 16 people were trapped under the rubble out of which 14 succumbed to their wounds while two other injured were shifted to hospital. The victims also included women and children.

According to police report, two houses of two brothers which were situated in close proximity were hit by a massive landslide late on Saturday night. Some of the deceased were identified as Sheraz, Sher Nawaz Khan, Gul Bibi, Alif, Amna and Anwar. There were also reports that at least three persons were missing after the incident and search for them was continuing.

The local people and police were taking part in the rescue activities. Torghar is one of the least developed districts of Khyber Pakhtunkhwa where there is no Rescue 1122 service or major hospital to deal with such emergencies. The local people were facing difficulties in rescue operation due to lack of equipment and difficult access.

Another roof collapse incident happened in Paijo village in Kakul, Abbottabad, which claimed lives of three members of a family.

Police said land sliding happened in the area during heavy rain which buried a house. A man, his wife and daughter reportedly died in the incident, while four others were injured.

The Rescue 1122 personnel rescued a woman and child in injured condition and shifted them to hospital.

Monsoon rains have lashed several parts of the country since September 09. The National Disaster Management Authority (NDMA) has issued a rain alert across Pakistan and has instructed authorities to take all precautionary measures in case of an emergency.