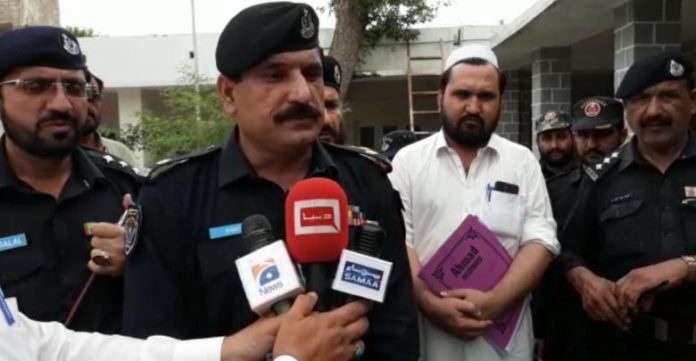 MIRANSHAH: The first ever formal police meeting was held at the deputy commissioner’s office of North Waziristan on Saturday which was attended by police officers and constables in large number.

District Police Officer (DPO) Shafiullah Gandapur said while addressing the meeting that the performance of police in maintaining law and order during recent polio vaccination campaigns and provincial elections in tribal districts was commendable. He said the Levies and Khassadar personnel who have joined KP Police will be given proper training.

The DPO said police stations in district headquarters Miranshah, Mir Ali and Razmak are fully functional. He said rank-to-rank merger of Levies and Khassadar personnel into KP Police has also been completed and they are performing their duties in professional manner.

He asked all the policemen to keep friendly behavior with the people and ensure presence on their duty whenever complainants come to police stations to provide them timely relief. He also urged the policemen to play their role in elimination of menace of narcotics from tribal districts and other negative activities.

At the end of the meeting, the DPO put badge of Deputy Superintendent of Police (DSP) to Qudratullah Khan.

The formal police meeting have initiated in North Waziristan after establishment of three police stations in the tribal district.

Khassadar and Levies personnel were merged into Khyber Pakhtunkhwa Police with an announcement by Chief Minister Mehmood Khan recently. The announcement was made by the chief minister to dispel misconceptions about the future of Levies and Khassadars after merger of erstwhile Fata with Khyber Pakhtunkhwa. Under the government’s announcement, all the Khassadars and Levies personnel got police ranks according to their existing ranks in tribal forces.

After integration of tribal security forces with KP Police, now police stations are being established in different parts of tribal districts and the process of registration of first information reports (FIRs) and investigation into criminal cases is underway. FIR experts have also been transferred from Peshawar, Mardan and Charsadda to tribal districts to provide relief to the complainants who visit the police stations.