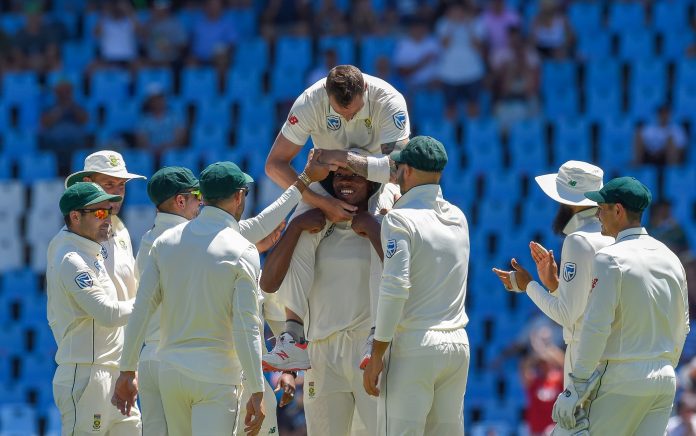 PESHAWAR: The first day of the first Test between South Africa and Pakistan belonged to fast bowlers as 15 wickets fell on the first day in Centurion.

Pakistan took a brave decision of batting first on a green track, but they folded for 181 in 47 overs. Babar Azam was the pick of batsmen for Pakistan who scored 71 runs and gave some respectability to Pakistan’s score. Azhar Ali contributed 36, while Hasan Ali scored 21.

Dale Steyn broke the South African record for most Test wickets by claiming the wicket of Fakhar Zaman. Steyn now has 422 wickets in Tests and has broken the record Shaun Pollock as South Africa’s leading wicket-taker. However, it was Duanne Olivier who broke the back of the Pakistan batting and got six wickets. Top ranked Test bowler Rabada was also in good nick and took three wickets.

Proteas still have five wickets in hand and they need 54 runs to avoid first inning deficit. So the match was evenly poised at the end of the first day’s play and it has been predicted that the match may produce a result within three days or even less as 15 wickets have already fallen on the first day.