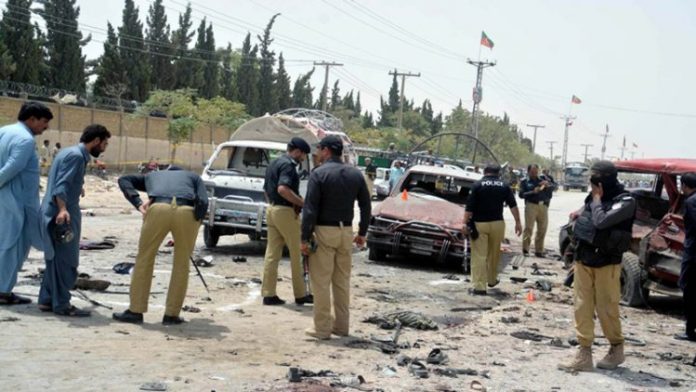 PESHAWAR: At least 16 people lost their lives and 30 others sustained injuries in a bomb blast in vegetable market in Hazarganji area of Quetta, Balochistan, on Friday.

The explosive material stuffed in a sack exploded when a large number of people were busy in shopping. The rescue teams and security forces immediately reached the spot and shifted the bodies and the injured to Civil Hospital and Bolan Medical Complex.

Deputy Inspector General (DIG) Quetta Abdur Razzaq Cheema confirmed the death of 16 people in the blast. He said one of the victims was a Frontier Constabulary personnel, while four FC personnel were also among the injured. He said the labourers were loading the sacks of potatoes in a truck when the blast happened. He said the experts will tell after probe whether it was a remote control blast or locally made bomb.

The bomb disposal squad also arrived at the site and cordoned off the entire area.

No banned outfit has claimed responsibility for the blast so far.

The DIG said the police and FC personnel escort the Hazara community people every time they come to the Hazar Ganji market for shopping and on Friday the same practice was repeated. He said the blast occurred around 7:35am when labourers were loading potato sacks in a truck. He said the probe will reveal how the explosives reached there. The police officer also expressed concern over delay in completion of Safe City Project for Quetta.

Expressing sorrow and grief over loss of precious human lives, they condoled and sympathised with bereaved families.