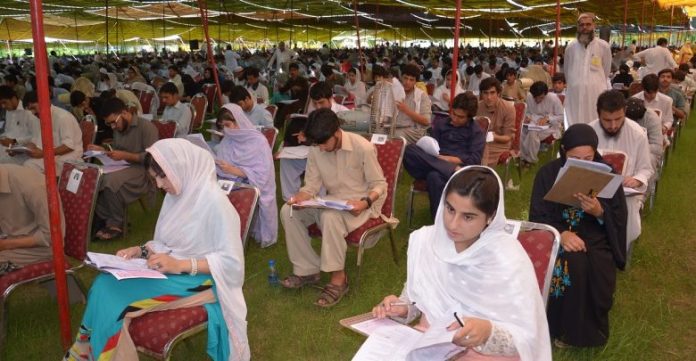 PESHAWAR: The Education Testing and Evaluation Agency (ETEA) has announced results of tests for admissions to medical and dental colleges of Khyber Pakhtunkhwa.

According to sources in ETEA, a total of 43,827 candidates appeared in entrance test for admissions to the public and private medical and dental colleges on Sunday, out of which 35,969 candidates have failed the test.

As many as 35,969 candidates could not get minimum 60 percent marks required to pass the exam. About 1,200 candidates did not appear for test and papers of 1,100 candidates were cancelled as they were involved in UFM (unfair means) cases. The percentage of pass candidates was 17.91 percent.

The entrance test was simultaneously held at 45 halls at seven regional centres across Khyber Pakhtunkhwa. A total of 43,827 candidates appeared in entrance test out of which 17,400 were female candidates. The examination centres were set up in Peshawar, Mardan, Swat, Malakand, Hazara, Kohat and Dera Ismail Khan.

The results of the test are available on the websites of Khyber Medical University (KMU) and ETEA. The results have also been communicated to all the candidates individually via SMS on their mobile phones through specially-prepared software by IT section of KMU.

ETEA conducts entrance tests of medical and engineering colleges in KP. The tests set by ETEA are considered the toughest and students require huge efforts and intelligence to pass these tests.