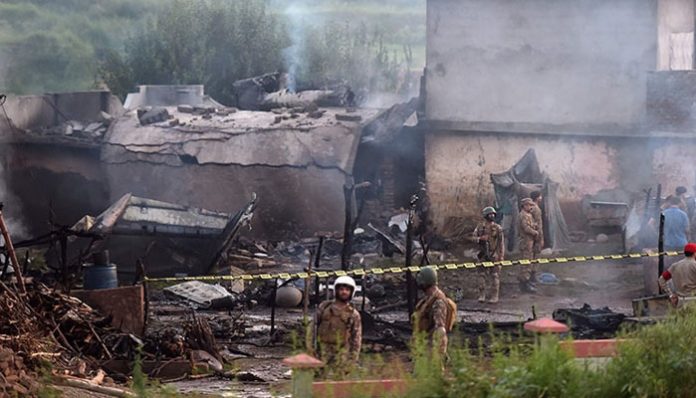 PESHAWAR: At least 18 people, including five crew members, lost their lives and 12 others were injured when a Pakistan Army Aviation aircraft crashed near Mora Kalu area of Rawalpindi in the wee hours of Tuesday.

The aircraft was on a routine training flight when it crashed. According to the Inter-Services Public Relations (ISPR), the aircraft crashed in built up area resulting into 12 fatal civilian casualties. The plane crashed during routine training, but investigation has been launched into the circumstances under which the crash happened.

The crew members who lost their lives in the crash include two pilots, Lieutenant Colonel Saqib, Lieutenant Colonel Waseem, Naib Subedar Afzal, Havaldar Ibne Ameen and Havaldar Rehmat. Rescue teams of the Pakistan Army and Rescue 1122 reached the spot of the plane crash immediately and started rescue operation. The fire that broke out after the crash was extinguished and the injured were shifted to Combined Military Hospital (CMH), Holy Family and District Headquarters Hospital in Rawalpindi. Some houses near the crash site also caught fire which was doused due to timely efforts of the district administration and rescue personnel.

Deputy Commissioner Rawalpindi visited the DHQ Hospital Rawalpindi and inquired after the health of those injured in plane crash. He directed the hospital staff to provide best medical treatment to the injured.

Emergency was declared in all hospitals of Rawalpindi after the plane crash.

The local people said that they heard sound of the plane coming down at 2:00am and when they came out of houses the plane was crashed and the place caught fire. They said they were frightened due to the explosion of crash.

Prime Minister Imran Khan has expressed grief and sorrow over the loss of precious lives in the Pakistan Army aircraft crash in Rawalpindi.

In a message, he prayed that Almighty Allah rest the departed souls in eternal peace and grant courage to bereaved families to bear the loss with equanimity. He also prayed for early recovery of the injured persons.

Chief Minister Punjab Sardar Usman Buzdar has also expressed deep sorrow and grief over the loss of precious lives and sympathized with the bereaved families.

He also directed the concerned officials to provide best medical facilities to the injured.