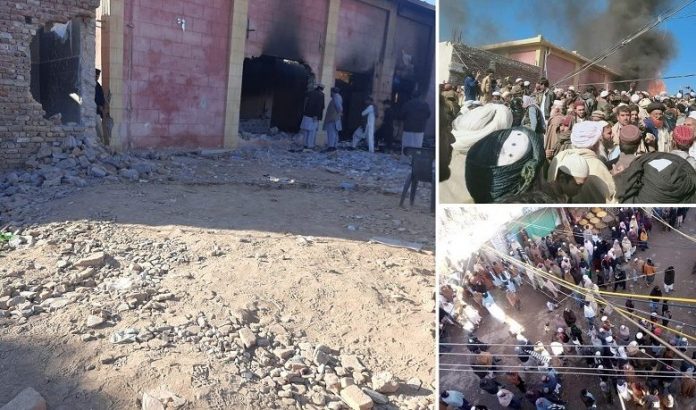 PESHAWAR: The Khyber Pakhtunkhwa government has dismissed 18 policemen from service and demoted 54 others by one year over negligence during demolition of a Hindu temple in Karak district.

Special Assistant to KP Chief Minister on Information Kamran Khan Bangash said in a video message that Chief Minister Mahmood Khan was the first to take notice of the Karak incident and ordered thorough inquiry. He said that under the light of the inquiry report, the KP police chief has ordered dismissal of 18 policemen and 54 others have been demoted by one year of service.

Kamran Bangash said everyone is equal before the law and no one involved in crime against minorities will be spared. He said the KP government is taking concrete steps for protection of rights of minorities. He said KP always remained an exemplary place regarding inter-faith harmony, but some negative elements tried to damage this soft image of Pakhtuns which warranted quick action. He said the action of KP government must serve as a clear message for all that such acts are intolerable.

On January 01, the KP government announced to rebuild the Hindu temple which was demolished by an angry mob in Karak on December 30, 2020.

Chief Minister Mahmood Khan had said that the provincial government will make sure that the temple is rebuilt as quickly as possible. He said directions have been issued to concerned authorities in this regard.

The chief minister said the people involved in attack on temple have been arrested and they will be dealt according to law. He said no one will be allowed to take law into own hands and rights of minorities will be protected at all costs. He said the government will ensure security of worship places of minorities.

Chief Justice of Pakistan Justice Gulzar Ahmed had also taken notice of the temple demolition in Karak and ordered the KP government to recover the money from the cleric who incited the mob for razing the temple. The top court had also ordered start of reconstruction work at the temple within two weeks.

Muslim residents of the area said the Hindu community was secretly expanding the temple building. They said the matter was reported to the police too, but no action was taken.