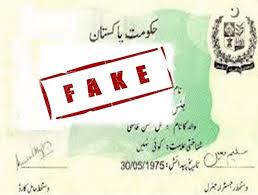 National Database and Registration Authority (NADRA) have lodged first information reports against 86 government officials and former councilors for having attested fake CNICs. Conducting hearing in the case, the court rejected the pre-arrest bail applications of 18 accused. Police took the custody of 17 accused while one of them made his escape good. The court would conduct hearing in the remaining cases on coming Saturday and Monday.