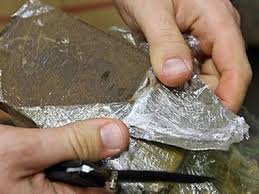 JAMRUD, 13 July: Political administration of Khyber Agency has claimed having seized 180-kilogram Chars besides arresting 13 alleged smugglers in a raid on a godown here today.

Jamrud Tehsildar Nek Muhammad said that the raid was conducted on a tip-off in Tedi Bazaar. The contraband was to be smuggled down country, he said adding that during the last few months the political administration has averted a number of bids to smuggle tens of billions of rupees drugs to settled districts of the country. The tehsildar said that due to strict monitoring at check-posts smugglers have been forced to use unfrequented routes to smuggle drugs. However, Khasadar force has also made raids on these unfrequented routes, he concluded.