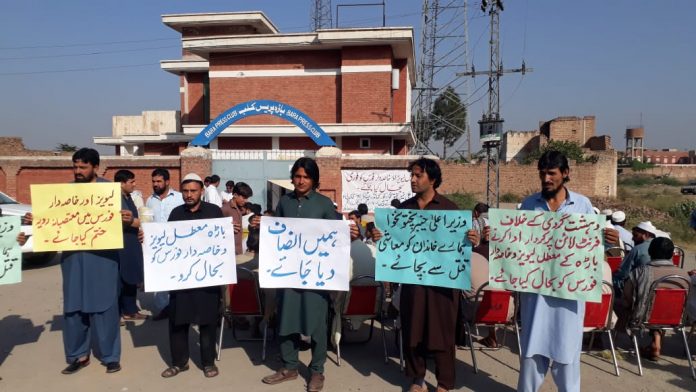 BARA: The members of the Khassadar and Levies forces who were suspended from their service in Bara area of Khyber tribal district are still waiting for their restoration. They have given a deadline of October 26 to the government for acceptance of their demands.

Participants of the rally were holding banners and placards inscribed with slogans in favour of their demands. Leaders of political parties said the suspended Levies and Khassadar personnel could not be restored several years after their suspension despite assurance made by the chief minister. They said the suspended law enforcers are facing a lot of difficulties after suspension and they are unable to make ends meet.

The protesters said the Levies and Khassadar personnel served the nation even during extremely difficult circumstances and did not even hesitate to sacrifice their lives for peace and security. They said they played the role of font line forces in the war against terrorism. They demanded Khyber Pakhtunkhwa Chief Minister Mehmood Khan, Peshawar Corps Commander and Capital City Police Officer (CCPO) to restore the jobs of suspended Levies and Khassadars in Bara so that they could earn their livelihood. They said they were being subjected to discriminatory treatment due to which their families are suffering. They said the chief minister and other concerned high-ups must save their families from economic murder.

As many as 198 Levies and Khassadar personnel were suspended in Bara 11 years ago. Since then they are repeatedly making demands for their restoration and the government is also making assurance, but they have not been restored.