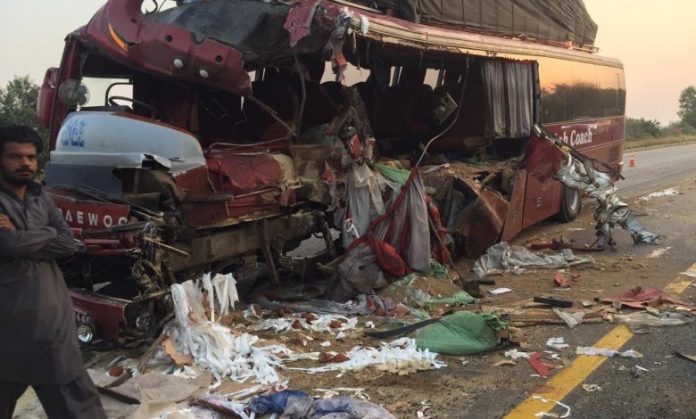 PESHAWAR: Two persons lost their lives and 12 others were injured when a passenger bus travelling from Lahore to Khyber tribal district met an accident near Swabi in the wee hours of Tuesday.

Both the deceased persons belonged to Landikotal area of Khyber tribal district.

Swabi Police said the passenger bus collided with a dumper due to which both vehicles were damaged. However, sources said, the bus was more damaged and more than half of its portion was completely destroyed.

Traffic accidents happen in Pakistan, particularly in Khyber Pakhtunkhwa, mostly due to poor condition of roads and untrained drivers.

The funeral prayer of Constable Mamoor, who was martyred in firing of unidentified armed men, was offered at Khyber Levies Centre with full official honour on Tuesday.

CCPO Muhammad Ali Gandapur expressed sympathy with the bereaved family and offered Fateha for the departed soul. He said the sacrifices of the martyrs will never go waste. He assured the family of the martyred policeman that the culprits behind the murder will be apprehended soon and they will be brought to justice.

The CCPO said the former Levies and Khassadar personnel have offered countless sacrifices for peace and security in the region and they will never hesitate from more sacrifices in future. He said the nation highly values the sacrifices of security personnel.