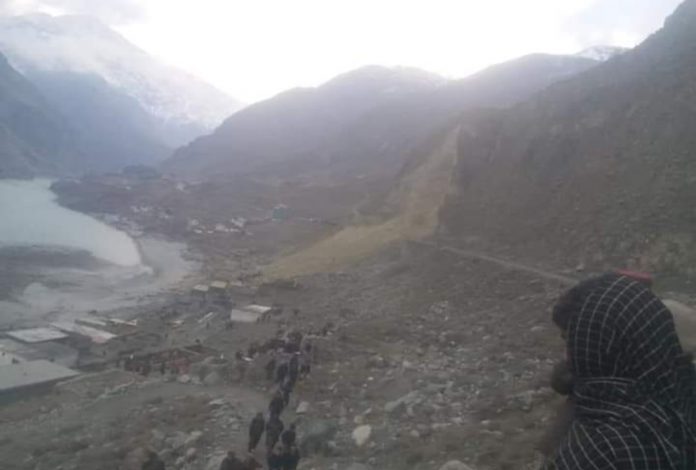 KOHISTAN: Two persons lost their lives when they were trapped under land sliding in Upper Kohistan after heavy rain on Tuesday.

A spokesman for Kohistan Police said two persons were travelling on a motorcycle when they came under land sliding in Shatial area. Both the persons died on the spot in the incident.

The deceased were identified as Rafin and Naeem. Both the deceased belonged to Harban village of Kohistan.

Earlier in the day, three members of a family lost their lives when a land piece fell on their house in in Usmania Mohallah in Abbottabad.

The incident of land sliding happened at 4:00am after rain in the area. A heavy boulder fell on a house due to which 12-year-old Muhammad Mubashir, 16-year-old Sardar Khawar and their mother lost their lives.

On 14 January, nine labourers lost their lives when their vehicle was trapped under a landslide on the Karakorum Highway.

The labourers employed by a Chinese company for work on Dasu power plant were returning from work when their vehicle was trapped under the landslide near Khushi point. The deceased labourers hailed from Kohistan.

A day after the Karakorum Highway incident, in a miraculous escape, a passenger van avoided a major damage despite being hit by a land sliding in Orakzai tribal district. Levies sources said a huge boulder from a mountain and hit a moving passenger van in Orakzai. The van moved away from the road with the impact of the huge stone, but fortunately it was held by a roadside tree, and did not fall into a deep ravine. Had the passenger coach fallen into the ravine, it would have caused many casualties.

Land sliding incidents happen in mountainous areas of Pakistan especially during and after rains.  Such incidents at times cause massive damages.

Two days ago, the whole Gilgit-Baltistan region was cut off from the rest of the country days due to land sliding triggered by heavy rains. Karakoram Highway was blocked at four points in Kohistan and thousands of commuters were stranded in the area.

The heavy rain has damaged communication system and roads have been blocked in many areas due to accumulation of water and land sliding.