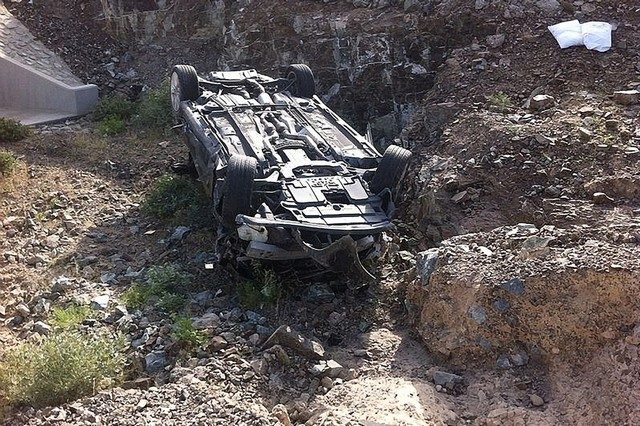 KHAR: Two people lost their lives and four others were injured when a vehicle fell into a deep ravine in Bajaur tribal district on Wednesday.

The injured persons were taken to the Agency Headquarters Hospital in Khar for treatment.

The slain labourers were identified as Raees, Waheed Gul and Arab Gul. They hailed from Batai area of Khar tehsil in Bajaur. The reason behind the killings couldn’t be ascertained.

In Karak district, one person was injured in firing by unidentified armed men in Latambar Bazaar. The assailants escaped after committing the murder. Police launched a search operation in the area, however, no arrest was reported.

A firing incident was also reported from Doaba area of Hangu in which one person was injured. The accused, Hamza was arrested by police and pistol was recovered from his possession.

One person was injured in a landmine blast in North Waziristan tribal district on Tuesday.

Official sources said Qeemat Gul was grazing his sheep in the fields near his village Tang Gala when he stepped over a landmine, which exploded and injured him critically. He was taken to Miranshah Hospital where he is under treatment.

Landmine blasts have claimed several lives in North Waziristan after the return of the temporarily displaced persons (TDPs).

On Friday, three soldiers were injured in a bomb blast in North Waziristan. A bomb was planted in Koranai barani nullah which exploded on the soldiers in Mir Ali tehsil.

On 25 January, two persons, including a security personnel, were injured in a blast near a security check post in Mir Ali.

A day earlier, two children of a family sustained injuries in a landmine blast in North Waziristan. Local sources said the incident happened near Ghulam Khan when the children were playing outside their home.