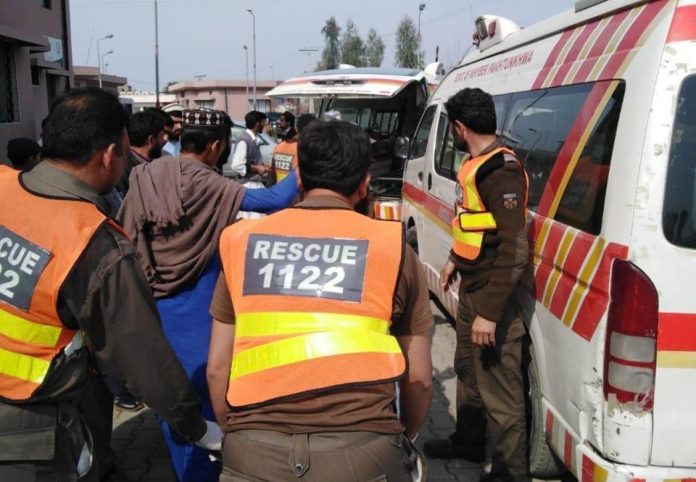 MARDAN: Two persons were killed and two others, including a woman, were injured in a firing incident in Karak on Tuesday.

Police said the incident happened in Mansoor Garh area in the morning where two groups exchanged fire over a dispute on the ownership of a street. Shireen Gul from one group and Farooq from the other group were killed in the firing.

Police have arrested one person from each group and filed a case against them. Further investigations into the case are underway.

Meanwhile, seven persons, including six children, were injured when a hand grenade went off in Zor Mandi area of Mayar in Mardan.

Deputy Superintendent Police (DSP) Sheikh Maltoon, Khanzada Khan said three brothers found a hand grenade in sand near Kalpani Nullah and were playing with it on the road when it exploded. The three brothers and three more children passing through the area in a chingchi rickshaw and rickshaw driver were injured in the blast.

The injured children and rickshaw driver were immediately taken to Mardan Medical Complex by the rescue personnel. The injured were identified as Haroom, Majeed, Rasheed, Ali, Musafir and Khushnuma.

Meanwhile, a 55-year-old person was shot dead on Utmanzai Road in Charsadda on Tuesday. The body of the unidentified person was shifted to District Headquarters Hospital Charsadda for post mortem.

In Hangu, the security guard of a school died when his gun went off on Tuesday. The body of security guard, Akhtar Gul was shifted to hospital for post mortem.

Another pig attack in Charsadda

A 14-year-old boy was injured when a pig attacked him in Charsadda.

The boy, Kafeel was grazing his cattle in the fields in Tarkai Ghakhi village in Abazai in the morning when a pig attacked him, leaving him injured. Two friends of Kafeel ran towards to rescue him after which the pig escaped.

The injured boy was taken to Tehsil Headquarters Hospital for treatment.

It was the second pig attack on the local population in two days. In the same area, a pig had entered a house and injured five persons, including two children, on Monday.