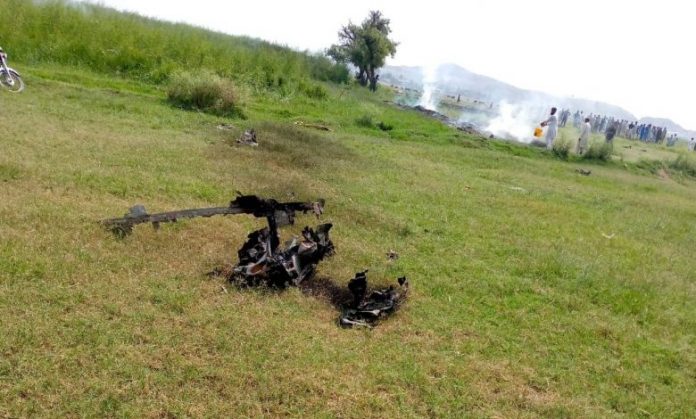 MARDAN: Two pilots were martyred as a trainer aircraft of the Pakistan Air Force (PAF) crashed near Mardan on Wednesday during a routine training mission.

The PAF said in a statement that a high-level board of inquiry has been ordered to investigate the cause of the crash.

It was second aircraft crash in two months in Pakistan. On August 06, a PAF jet crashed near Attock during a routine training mission.

However, both pilots ejected successfully and no loss of life or property was reported on the ground. A board of Inquiry was ordered to probe the cause of the accident.

As the Board of Intermediate and Secondary Education (BISE) Mardan on Tuesday announced inter and matric results.

A student named Qandeel has made a new record. Qandeel from a private school in Akora Khattak, Nowshera, has taken the first position in the Mardan board and became the only female student throughout Pakistan who secured all 1,100 marks in the exam.

The percentage of successful candidates was remarkable as 97.82 percent of students passed the matric exam, while 96.48 percent students have passed the intermediate exam.

Qandeel managed to obtain 1100 marks out of 1100. The BISE Mardan held a ceremony to give away awards to the position-holder students. Commendation certificates and cash prizes were distributed to them. Qandeel is an orphan child, and her mother is serving as a teacher at a government school.

Qandeel said her father died from cancer so she wanted to become a doctor to treat the patients suffering from the lift-threatening disease. Sharjeel Ahmad, Farhan Naseem and Mohammad Bilal Haider shared second position by bagging 1098 marks out of 1100.

The BISE Bannu has also announced results of the SCC and intermediate examinations.