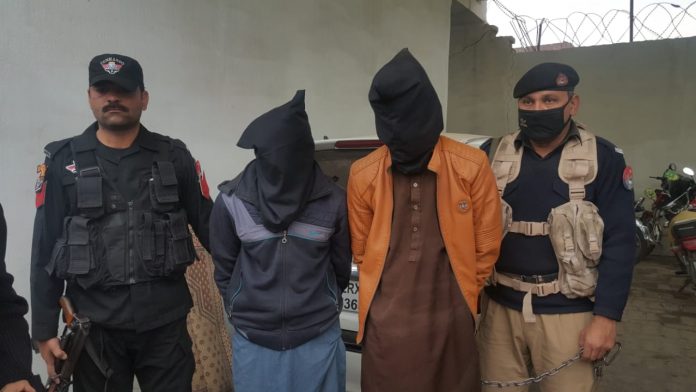 PESHAWAR: Two alleged target killers involved in the murder of a head of a pro-government peace committee of Khyber tribal district have been arrested in Peshawar, police said.

Malik Mir Alam Afridi, head of the peace committee of Bara tehsil of Khyber tribal district, was going to Bara from Peshawar in his vehicle on Saturday morning when two target killers on a motorcycle opened fire on him in Achini Khwar area, leaving him dead on the spot.

A police team immediately reached the spot and collected evidences. Police also launched a search operation after the incident and barricaded the entry and exit routes of the city. A team of City Patrolling Mobile Unit in Hayatabad area signalled two suspected persons who were travelling on a motorcycle to stop. However, the suspects did not stop and sped away. The police team followed them and eventually arrested them. Two pistols were recovered from the possession of the suspects.

Police said the suspects identified as Sajid and Kamran, who are both residents of Khyber tribal district, were sent to lock up in Sardheri for interrogation. During the initial interrogation, both the suspects confessed killing Malik Mir Alam Khan. They also revealed that they also plotted to kill Malik Mir Alam two days earlier, but that plan didn’t work.

Further investigation from the suspects is underway. Police did not tell about any link of the arrested suspects with any banned outfit.

Meanwhile, Mardan Police with the help of military personnel conducted a joint search operation in Katlang area of Mardan and arrested 45 suspects.

Police said the operation was carried out in Dheray Killi, Charchur, Ghalay Killi and nearby mountainous areas during which 260 houses were checked and suspected hideouts of criminals were also raided. Police claimed that seven Kalashnikovs, eight pistols, one rifle and hundreds of cartridges were also recovered during the operation.

Police said the operations against the criminal elements will continue. The general public was also requested to cooperate with the security agencies in the operations.

Forty-nine suspects have also been arrested in search operations in Charsadda, police claimed. Arms were also recovered during the operations.