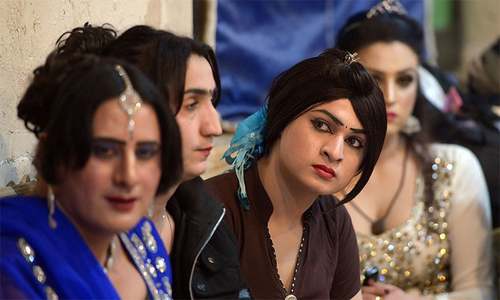 Transgender person Arman alias Collegi told police in hospital that he and his friend Farmanullah were going to attend a music programme in Takht Bhai in a vehicle when the accused Rasheed along with an accomplice riding a motorcycle opened fire on them in Jhanday Bazaar area. He said he and his friend sustained injuries in the firing.

The assailants escaped from the scene after committing the crime. Rescue personnel shifted the injured transgender persons to Mardan Medical Complex. According to doctors, the condition of the injured persons was out of danger.

Police said it came to know through initial investigation that the injured transgender persons had a verbal exchange with accused Rasheed two days ago. Raids are continuing for the arrest of the accused.

Few days ago, on Eid day, Mardan Police arrested three persons accused of cutting the hair of a transgender person after briefly kidnapping and torturing him.

Police said it came to know about the incident which happened in Mall Mandi Chamiaran area on Eid day. The transgender person, Shakeel alias Shakeela, was kidnapped briefly and he was tortured and his hair were cut by the kidnappers. The district police chief took notice of the matter and formed a team for arresting the accused. The police team investigated the incident on modern scientific lines and arrested three accused, Shahzeb, Mansoor and Fakhar-e-Alam.

After every attack on transgender persons, they stage protests and the authorities promise to provide security to them, but after few days, people forget about the incident and then another attack happens and the old practice is repeated continuously. Transgender persons also complain of not receiving proper medical care at public sector hospitals. They allege that some of their friends who get injured in attacks die in hospitals as they do not receive proper medical attention.