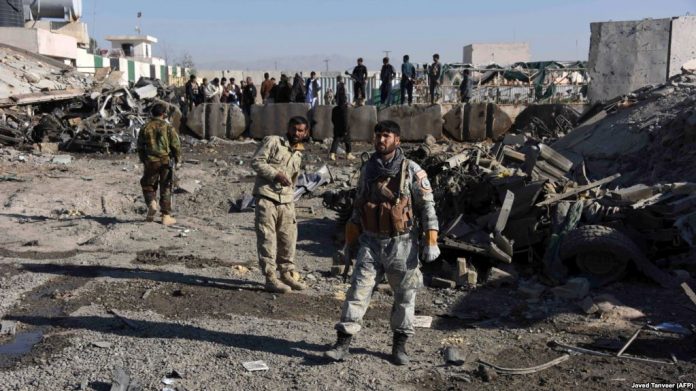 PESHAWAR: At least 20 Afghan soldiers were killed in overnight raids by the Taliban militants in southern Kandahar province of Afghanistan near the border with Pakistan.

A provincial official said the Taliban attacked several military check posts in Shorabak district on Tuesday night in which about 20 soldiers were killed and eight were injured.

A military helicopter also crashed in Kandahar on Wednesday in which pilots were wounded. In Helmand, a drone of foreign forces crashed as a result of technical issues. Nato’s Resolute Support (RS) mission in Kabul said the drone went down in Helmand due to technical problems.

In northern Sari Pul province, at least five members of the country’s security forces were killed when the Taliban attacked a joint army and police base, said Zabihullah Amani, the provincial governor’s spokesman. He said that seven other forces were wounded in Monday night’s attack in Sangcharak district.

In northern Samangan province, an Afghan military officer killed two of his fellow soldiers and later fled to join the Taliban.

On Monday, three US service members were killed and three others were wounded by an improvised explosive device (IED) near Bagram Airbase.

The Resolute Support confirmed the incident and said the wounded service members were evacuated and are receiving medical care. In accordance with US Department of Defence policy, the name of the service members killed in action are being withheld until 24 hours after notification of next of kin is complete.

However, Bagram district governor claimed that the attack was carried out by an explosive-laden vehicle. Taliban in a statement claimed responsibility of the attack and said the “suicide attacker destroyed two tanks and killed over 10 US military servicemen”.

About 14,000 United States troops are currently in Afghanistan, though President Trump has asked administration officials to prepare for cutting that number in half.

Taliban have escalated attacks in Afghanistan despite ongoing peace talks with the US officials. Considerable progress has been made in the talks so far and both the parties are optimistic about a good result. However, continuous violence in Afghanistan puts questions marks on the talks process.