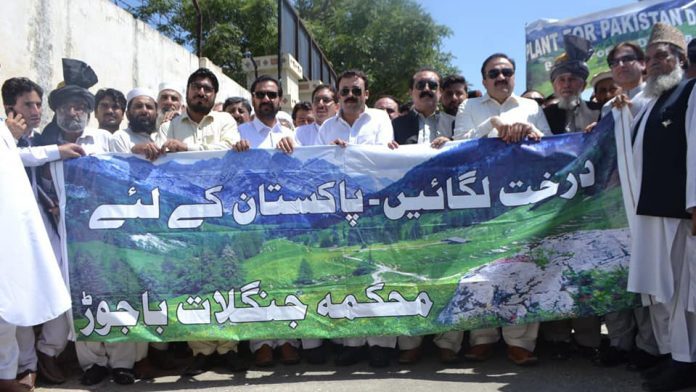 PESHAWAR: Forest department officials in Bajaur said that during the last five days, a total of 200,000 saplings have been planted across the Bajaur district. The officials said this during a press conference at the district forest office.

“A total of 200,000 saplings have been planted in the district during five days long ‘Plant for Pakistan’ tree plantation drive,” said Divisional Forest Officer Bajaur, Hayat Ali to the media.

Ali furthered that ‘Plant for Pakistan’ plantation campaign was successfully completed in Bajaur tribal district in which employees of the forest department, officials of the district administration, police, Levies force, education and agriculture departments and tribal elders took part in the plantation drive.

He told that majority of trees were planted by the forest department while some of them was by the local community. He said that all the plants, planted in the region were very popular variety and suitable for the local environment.

‘Plant for Pakistan’ plantation campaign was inaugurated by Federal Minister for Economic Affairs, Muhammad Hammad by planting a sapling, in the vicinity of the office building of the Economic Affairs Division.

The plantation marked the formal launch of the “Urban Forestry” model as part of the Ten Billion Tree Tsunami Programme conceived by the Prime Minister of Pakistan, said a press statement. The statement claimed that officers of the division also actively participated in the campaign by planting saplings.

Special Assistant to the Prime Minister on Information and Broadcasting Firdous Ashiq Awan said the objective of “Plant for Pakistan” campaign is to make every part of the country green. In a tweet, Awan said Imran Khan is the only leader who took solid steps to deal with the challenges of climate change and gave special importance to tree plantation.

Firdous Ashiq Awan revealed that the government had set a target to plant 10 billion trees in five years under Plant for Pakistan program.