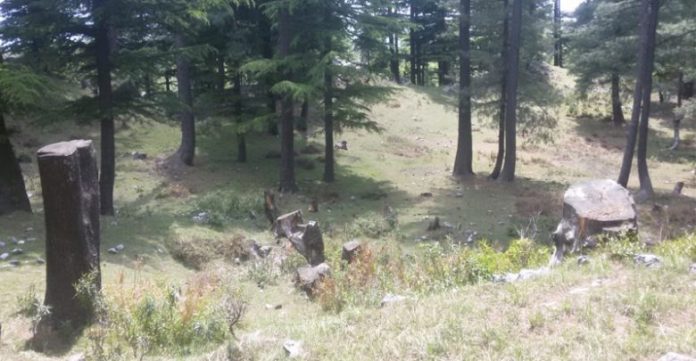 PESHAWAR: On the recommendations of the inquiry committee formed by the Khyber Pakhtunkhwa government over complaints of forest trees cutting in Kalam area of Swat, 25 officials of the department, including two district forest officers (DFOs) have been suspended over negligence.

Commissioner Malakand Division Riaz Mehsud said the committee will furnish further recommendations for further action against the negligent officials. He said all steps will be taken to protect forests in Malakand Division. He said any person or group involved in timber smuggling will never be spared.

The commissioner said he visited Kalam Valley few days ago and was disappointed to see the forest trees were cut mercilessly. He said he informed the chief secretary about the matter who formed a three-member committee and ordered it to present recommendations after concluding probe within seven days. He said after arrival of the report, the chief secretary suspended 25 forest officials, including two DFOs and five range officers.

Forests cutting is considered by the environment experts one of the main reason behind climate change. The best answer to stop the impact of climate change is to grow more trees and protect them.

The elders of South Waziristan tribal district held a Jirga with the officials of Forests Department on Tuesday for protection of forests and more plantation.

DFO Saleem Marwat said while addressing the Jirga that 800 closures will be formed for protection of forests in which 800 people will find jobs. He said the 800 guards deployed at 800 closures will protect the forests from any harm and will also help the people in growing more trees and prepare an emergency plan in case fire erupts in the forest.

The DFO said plants will be planted on 6,000 acres land in South Waziristan. He said the new plantation drive will create job opportunities for local people. He said people will also get different plants from the nurseries free of cost.

Experts said growing more trees is the only answer to stop the process of environment degradation and climate change.