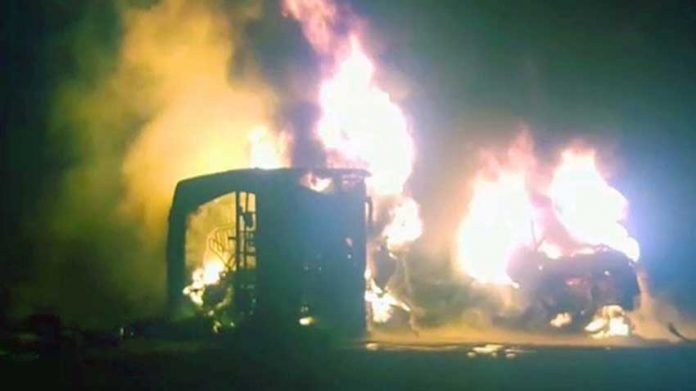 PESHAWAR: At least 26 people lost their lives and many others were injured in a collision between a passenger coach and a truck in Hub tehsil of Lasbela district in Balochistan on Monday.

Media reports said the coach was carrying more than 40 passengers from Panjgur district of Balochistan to Karachi when it collided with a truck carrying fuel and coming from the opposite direction.

The collision triggered huge fire which engulfed both the vehicles and passengers were trapped inside. The truck was reportedly carrying Iranian oil when it met the accident. The district administration of Lasbela confirmed that 26 people have lost their lives in the accident. All of the victims died after suffering severe burn injuries.

Rescue operation was launched by the police after the incident and the injured were taken to hospital. Hospital sources said the condition of some of the injured was critical. The injured were being shifted to Karachi as there were no proper facilities in the local hospital.

Local sources said some of the bodies were burnt beyond recognition.

This is not the first time such a tragedy has happened in Pakistan. Many lives were lost in similar early accidents, but adequate steps were not taken to stop recurrence of these accidents. Most of such accidents happen due to untrained drivers, reckless driving, poor condition of roads and poor maintenance of vehicles.

Earlier in the day, a vehicle carrying members of the pro-government peace committee in Ziari area of Landikotal in Khyber tribal district fell into a ditch in which one committee member lost his life and two others sustained injuries.

The vehicle was travelling from Zakhakhel to Landikotal Bazaar when it met the accident. Sources said the accident happened due to poor condition of the road. The injured were taken to a local hospital.

Three labourers were killed in a blast in a coalmine in Dukki district of Balochistan on Monday.

On January 2, four workers lost their lives and another sustained injuries in an explosion in a coalmine in Chamalang area of Dukki district.

Pakistan Central Mines Labour Federation says about 100 to 200 labourers lose their lives or get injured in coal mine accidents across the country every year. The coalmine labourers work under extremely difficult and dangerous circumstances and always run the risk of being trapped into a mine due to its collapse or accumulation of poisonous gas.