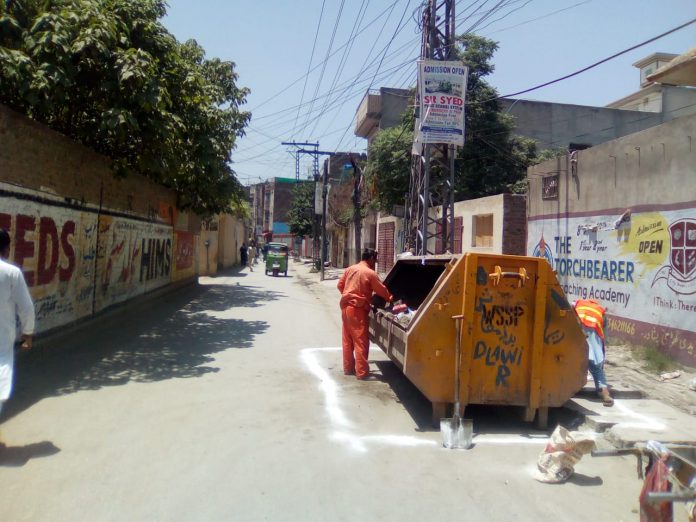 PESHAWAR: The Water and Sanitation Company Peshawar (WSSP) during its Eid operation has disposed of 2637 tons of waste generated in 43 out of 92 Union Councils of the provincial capital.

The sanitation Company has earlier cancelled Eid holidays of more than five thousand sanitary, water supply and management staff and instructed them to ensure their presence during the Eid holidays.

From zone-B, which includes localities Gulbahar, Circular Road, Lahori Gate, Nishtar Abad, Afridi Ghari, Shaheen Muslim Town and adjacent areas a total of 1204.125 tons of waste was produced in 3 days of eid while from Zone-C and Zone-D, 426.67 tons and 308.52 tons of waste were disposed of respectively. The waste generation ratio was higher during Eid days comparing to normal days.

A total of 50 complaints were registered with an addressal ratio of 100 per cent.  The Chief Executive Officer Syed Zafar Ali Shah made inspections during all three days whereas General Managers Operations, Zonal Managers and other zonal staff were also on duty to ensure better provision of essential services in the provincial metropolis.

Instructions have also been issued by the chief executive to zonal managers instructing them to take departmental action against staff who were absent during Eid days while those who have exhibited outstanding performance will be rewarded accordingly, said in a statement issued by the company’s media cell.

“It is our aim to ensure the garbage-free city and we are doing all-out effort to achieve the target,” said Chief Executive Syed Zafar Ali Shah while appreciating sanitary workers efforts to keep the city clean and hygienic.