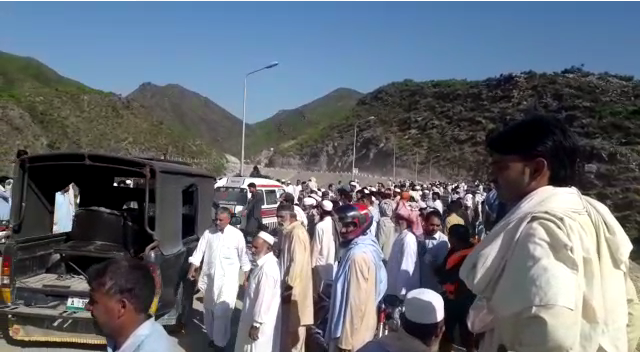 SWABI: At least three children died when a boat carrying tourists capsized in Kundal Dam in Swabi on Thursday.

A boat carrying 38 tourists capsized in Kundal Dam in Swabi. Thirty-five tourists were rescued on Thursday night, while three children were missing. Police said the bodies of the three missing children were found on Friday.

A child lost her life and two others were injured in a grenade blast in Khar tehsil of Bajaur tribal district on Thursday.

Local sources said the children were playing near Mamenzai bridge when they found a hand grenade. One child, Zulekha, picked up the grenade thinking that it was a toy. When she realised that it was a bomb, she tried to throw it away, but it exploded, leaving her dead on the spot. Two other girls were also injured in the grenade blast.

Both the injured sisters were immediately taken to Khar Hospital. The administration has initiated investigation into the incident.

Meanwhile, a body was recovered in Kabul river in Landikotal area of Khyber tribal district. The victim was identified as Attiqullah, who was an Afghan national. The security forces handed over the body to Afghan officials at the border.

Two security personnel deployed on Eid security duty were martyred in firing by terrorists in Harnai area of Balochistan, the ISPR said.

The area was cordoned off after the incident and a search operation was also launched, but no arrest was made.

The funeral prayer of the soldier from Lakki Marwat martyred in Harnai was offered in his ancestral village Mamakhel. FC officers and other area notables attended the funeral prayer.

Mehtab Khan was unmarried and he joined FC Balochistan three years ago. His father Muhammad Younas said he is proud of his son’s sacrifice for the country.

Traffic accidents in Mardan and Tirah

Thirteen persons were injured in a traffic accident in Madan.

A flying coach and car collided at Swabi Road in which 13 people were injured. The Rescue 1122 team immediately reached the spot and shifted the injured persons to hospital. The condition of all the injured was stated to be out of danger.

Meanwhile, 18 people were injured when a passenger van overturned in Tirah area of Khyber tribal district.

Local sources said several persons were going for tour to Tirah Maidan when their vehicle overturned due to a mistake by the driver. All the injured persons belonged to Akakhel tribe of Khyber district.

The injured persons were shifted to Hayatabad Medical Complex Peshawar.