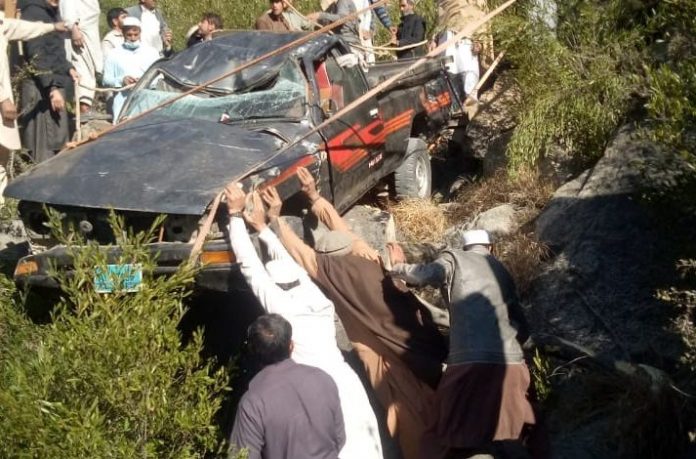 TNN correspondent reported that a Datson pick-up fell into a ravine in Gul Dheri are of Khal tehsil due to which two persons died and four others were injured.

Police said the Datson went out of driver’s control and fell into a ravine. Driver Kashar Khan and a young boy Abu Zar died on the spot, while Javed’s wife, his two-year-old daughter and another person identified as Ihtesham were injured.

The local people shifted the injured persons to Khal Hospital. Police also reached the spot and took part in rescue activities. Police filed a report of the incident and initiated investigation.

In another accident, a young man lost his life and two others were injured when a motorcycle crashed due to over speeding in Khazana area of Timergara tehsil.

TNN correspondent reported that a young tailor, Shahid Jameel was travelling on a motorcycle along with his friends. The bike rider did not slow up at a speed-breaker and lost balance and his motorcycle crashed. Shahid Jameel and his two friends were injured in the accident and were shifted to District Headquarters Hospital Timergara. Later on, Shahid Jameel succumbed to his injuries, while his two friends are still under treatment.

The youth was laid to rest at his ancestral graveyard in Manogay area.

According to a report, as many as 18,550 traffic accidents happened in 32 districts of Khyber Pakhtunkhwa till November 30 last year.

According to traffic officials, underage drivers, lack of awareness about traffic rules and over speeding are some of the main reasons behind traffic accidents. Most of the people who died in these accidents were young.