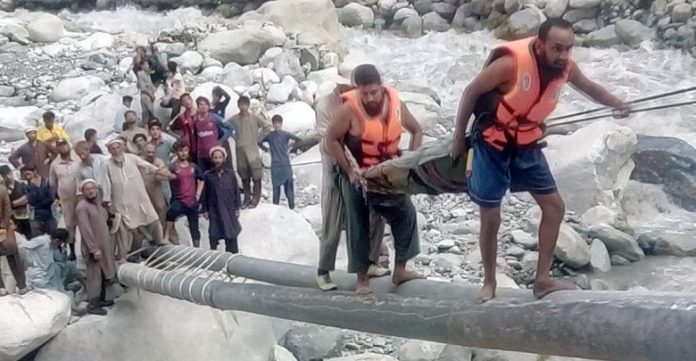 CHITRAL: Three persons lost their lives and seven others were injured when a make-shift bridge on a flooded nullah fell in Golian valley of Chitral on Saturday.

The Rescue 1122 spokesman in Chitral Sohail said the recent rains and floods badly affected the roads and suspension bridge of the area was also washed away. The local residents had set up a temporary bridge with the help of pipes to cross the stream.

On Saturday afternoon, the local residents were using the make-shift bridge to shift a pipe to their village for water supply when the pipe slipped and fell down. One person died on the spot in the incident, another was washed away in the flooded stream, while eight others were injured.

The spokesman said the injured persons were shifted to hospital where another person succumbed to his injuries. He said the remaining injured persons are still in the hospital and receiving treatment. He said search is continuing to find the body of the person who was washed away in the stream.

Earlier in the day, a Chinese engineer drowned in Mastuj River in Upper Chitral while two other Chinese nationals were rescued as they fell into the river.

Police said that three Chinese nationals working for a Peshawar-based private mining company were crossing a wooden bridge at Chamarkun Gol Nullah when they fell into the river. The condition of the wooden bridge was very poor and it broke when the Chinese workers were crossing it.

A Chinese engineer drowned in the river, while two others were rescued, sources told TNN. The rescued Chinese nationals were identified as Jiangbao and Lee Quan, while their deceased colleague was identified as Yu Cheng.

The body of the drowned Chinese engineer was recovered and handed over to police. The body was taken to Rural Health Centre Mastuj for post mortem.

The condition of suspension wooden bridges in Chitral is very poor and it might cause more mishaps. Some wooden bridges are existing in the area since 1917 and they were never replaced, nor were they properly maintained.