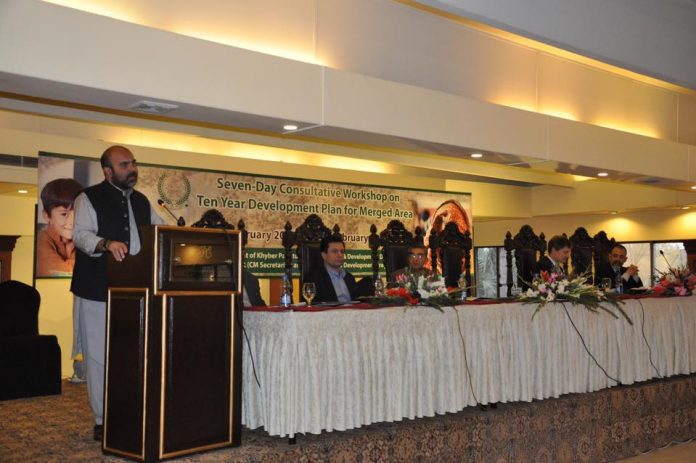 The workshop deliberated over the ten year’s development plan for the newly merged tribal districts so as to prepare a future road map for newly merged Districts. Provincial Minister for Finance Taimur Saleem Jhagra was the chief guest at the concluding ceremony of the workshop.

While addressing the participants of the workshop, Jhagra said that merger of Ex-FATA is a challenge and both Federal and Provincial institutes will jointly work to face the challenge. He appreciated the proposals presented by participants in the workshop and termed them its effective process for the newly merged districts.

The finance minister added the tribal people faced terrorism courageously, now it is the right time to compensate their deprivation through development schemes. He said this consultation workshop would pinpoint the targets necessary for the welfare of people of these new districts.

The authorities of Information and Public Relations Department while highlighting the short, mid and long term strategies for the newly merged districts said that the department had done planning for the provision of information to the new districts.

They said that for the first time, the department is providing information to the people of tribal areas. The radio stations of the Information Department were telecasting different programmes for the education and cognizant of dwellers of these new districts.

More radio stations would be established in these districts under the ten years development plan of the department, the workshop was told. Training of journalists, the establishment of Press Briefing rooms and an effective system for in time provision of information to the people of merged areas were included in the ten years plan of Information Department.