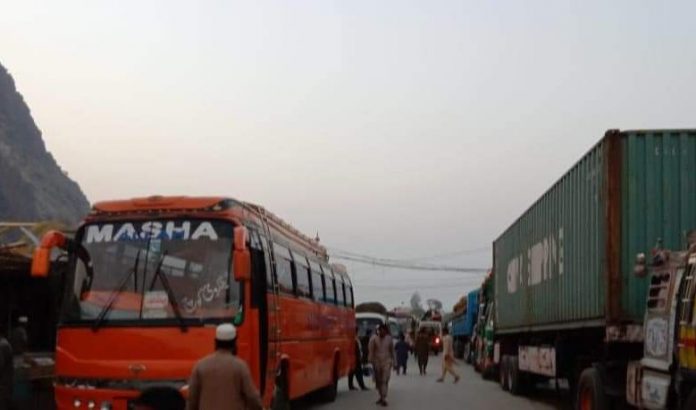 LANDIKOTAL: As many as 332 Afghan students reached Pakistan via Torkham border on Tuesday.

On the directions of Deputy Commissioner Khyber Mansoor Arshad, Assistant Commissioner was present at the border to welcome the arriving Afghan students.

The arriving Afghan students will initially undergo quarantine for eight days after which they will have to undergo coronavirus test and upon negative test, they would be allowed to continue with their studies in their respective educational institutions.

In another development, the Taliban officials arrested their four border guards who removed Pakistani flag from a truck carrying aid along the Torkham border.

Taliban spokesman Zabihullah Mujahid said on Tuesday that the four guards have been arrested and they would be punished.

Terming the incident abhorrent, Zabihullah Mujahid said that the Taliban condemn the incident and efforts were being made to curb the occurrence of such incidents in the future.

The aid and relief had been sent by the Pak-Afghan Cooperation Forum.

Video footage of this incident showed that as soon as the truck, part of a relief convoy of 17 trucks, entered Afghanistan on Sunday, some Taliban border guards forcibly removed Pakistani flag from the vehicle. The trucks were carrying 300 tons of foodstuff, including wheat flour, rice and edible oil. A formal ceremony was also held on this occasion near the border in which elders from both side attended the formal meeting.

Expressing anger over the incident, the Taliban spokesman said that the entire Taliban leadership was angry and elements involved in this incident would be dealt with severely.

On Monday, four more trucks carrying aid were sent from Pakistan, but they none of them bore Pakistani flag.

An office-bearer of the Pak-Afghan Cooperation Forum said that until the formal handing over ceremony, the environment was very friendly. He said the officials of Taliban also attended the ceremony.