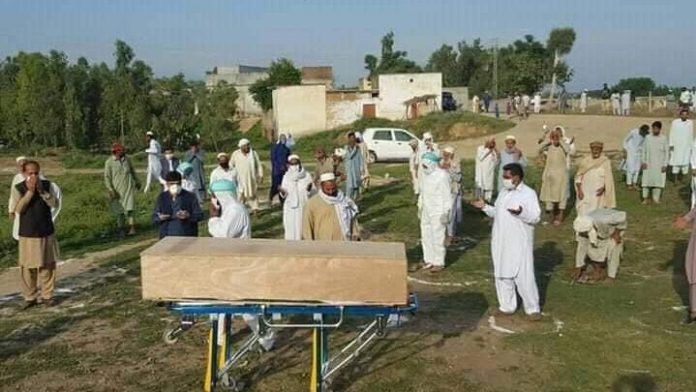 PESHAWAR: The death toll from COVID-19 in Khyber Pakhtunkhwa has reached 432 as seven new deaths were reported on Thursday.

According to latest data shared by the KP Health Department, as many as 359 new cases were confirmed in the province during the last 24 hours, taking the tally to 8,842. The new infections include 67 from people returning from abroad who have been kept at different quarantine centres. Out of seven new deaths, two have been reported in Peshawar and one each in Swat, Mardan, Malakand, Abbottabad and Kohat.

The Health Department said a total of 2,693 patients have recovered in KP including 61 during the last 24 hours. Active cases are 5,717.

KP maintains the grim milestone of most deaths from the pandemic in the country, while Peshawar remains the most affected district of KP with 246 deaths, over half of the total deaths in the province. The total confirmed cases in the metropolis have reached 3,263, including 114 fresh cases during the last 24 hours.

According to official data, Swat remains the second most affected district with 38 deaths, Mardan has reported 26 deaths, Nowshera and Malakand have reported 14 and 15 deaths respectively, Abbottabad has reported 13 deaths, Swabi reported 11 and Bajaur tribal district and Kohat have reported 10 deaths each.

Meanwhile, Adviser to KP Chief Minister on Information and Public Relations Ajmal Wazir expressed grief and sorrow over the death of senior journalist from Peshawar Fakhruddin Syed. He said that that the KP government will give Rs1 million to the journalist’s family, who passed away after contracting coronavirus. The CM’s aide also added the funeral of the deceased journalist.

As many as 432 deaths have been reported in KP, 381 in Punjab, 396 in Sindh, 41 in Balochistan, nine in Gilgit-Baltistan, 19 in Islamabad Capital Territory and five in Azad Kashmir.

The total confirmed cases of COVID-19 in Pakistan have mounted to 62,700.

As many as 20,231 patients have recovered from the virus in Pakistan.