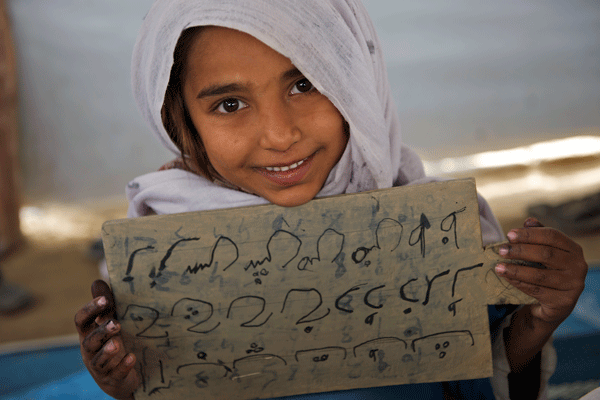 Holding a packet of masks in his hands, the child ran towards me at Saddar Road BRT station. He tried to coax me into a buying a face mask saying it was just Rs 10 a piece. “Without a mask, they would not allow you board a bus,” 11 years old vendor Omar Hayat said.

In the meanwhile, two others child vendors joined us. Omar smiled at his friends and said that he has already the picked the buyers ahead of them.

I paid him Rs 10 for the mask. When asked if he goes to school, the child responded in negative. “My father is long dead and I am helping my mother in the running the house,” he said. He said that if starts schools, and then there would no money to run the house.

This is the situation everyone across the country is familiar with. Children like Omar in the school going age could not afford to go to schools and instead helping their families in earning bread. These children are employed in several sectors and their meager earnings are helping to keep these destitute families afloat.

Successive governments have been trying to enroll out of school children to increase literacy ratio and improve educational standards. In order to increase enrollment, previous government decided to give stipends to students in selected districts at primary schools. However, now this initiative has been extended to entire country under the Ehsaas Waseela Taleem and it includes primary till intermediate classes.

According to education department, this initiative is aimed at increasing awareness regarding education among those receiving monthly stipends from Benazir Income Support Programme.

Besides, its other objectives include increasing enrollment in government schools, reducing dropout ratio and ensure equal access to education.

How to register for Ehsaas stipend?

To be eligible for the Ehsaas stipend programme, the students need to fill a form available at school office. The forms are then to be submitted at BISP offices are countersigning from school’s headmaster.

Children now enrolled in class VI till X are eligible for the scholarships. In the meanwhile, BISP board has also approved the proposal to include intermediate classes in ambit of the prorgramme.

BISP board has also approved the amount of stipend for each category of students.

However, it is also need of the hour to raise awareness regarding initiatives like Ehsaas Waseela Taleem in the society.

Rising number of out of school children in KP

According to latest BISP survey about 4.7 million children in five to 16 years bracket are out of schools in KP.  Survey figures also show that about a million of out of school children live in merged districts.

The survey was carried out as part of the BISP’s National Socio-Economic Registry census with the help of elementary and secondary schoolteachers.

NSER survey results show that 2.9 million girls in the school going age were also out of school across the province. The survey also showed that 65 per cent people declared poverty as the reason for not sending their children to school, 15 attributed it to low standards of education and 12 per cent children were engaged in child labor.

District wise situation of out of school children

Similarly, the percentage of out of school children stands at 61pc in Torghar, 55 in Shangla, 53 in Lakki Marwat, 51pc each in Tank and Battagram and 47 in Hangu and Bannu districts.

In the merged tribal districts, North Waziristan has the most out-of-school children with 66pc while 63 pc in Bajaur, 61pc in North Waziristan, 51pc in Mohmand and Khyber, and 47pc each in Kurram and Orakzai are out of school.