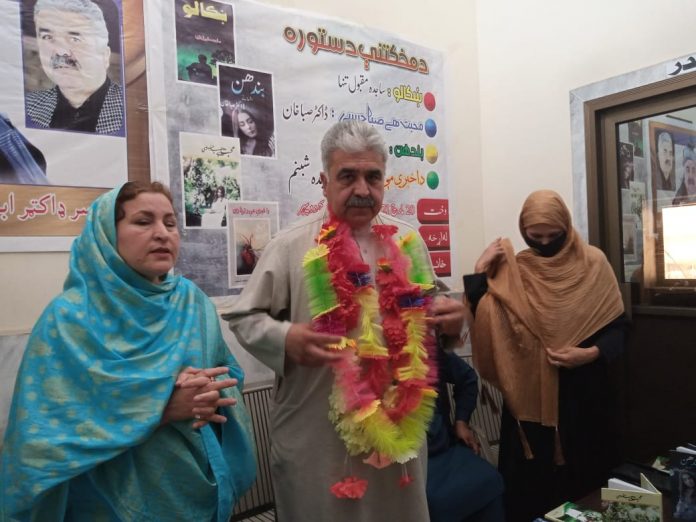 On the occasion, a Mushaira (poetic symposium) was also held where the Pashto poets and poetesses presented attractive poetry and received applause from participants.

Khal administrator Kulsoom Zeb, who is also a well-known poetess, said while talking to TNN that the function was organised for launching four books, two each in Pashto and Urdu, written by Pakhtun poetesses, and to pay tribute to Abaseen Yousafzai for his nomination for Presidential Award which he is expected to receive on the occasion of Pakistan Day, March 23. Kulsoom Zeb said the books include ‘Mohib Ho Saba Jaisi’ and ‘Bandhan’ written by Dr Saba Khan, ‘Khkalo’ by Sajida Maqbool Tanha and ‘Da Khabari Me Pa Zra Di’ by Syeda Shabnam.

About Khal, Kulsoom said besides a large number of women writers from Khyber Pakhtunkhwa, 60 poetesses from Afghanistan are also its members. However, she said, only 30 members are participating in functions owing to cultural restraints. She believes that women have been bestowed with greater aesthetic sense and they deserve more support and appreciation for their creative work. She said her organisation is working hard for supporting creative women.

Abaseen Yousafzai thanked Khal for honouring him and urged the women writers to participate in literary functions to improve their creative ability and learn from experience of other colleagues. He said it is a fact that women faced hindrances in expressing their creative work, but the situation is improving gradually and more women are joining the field of poetry and literature.

“In my opinion, the share of women is far greater than men in creating awareness in the society,” he said.