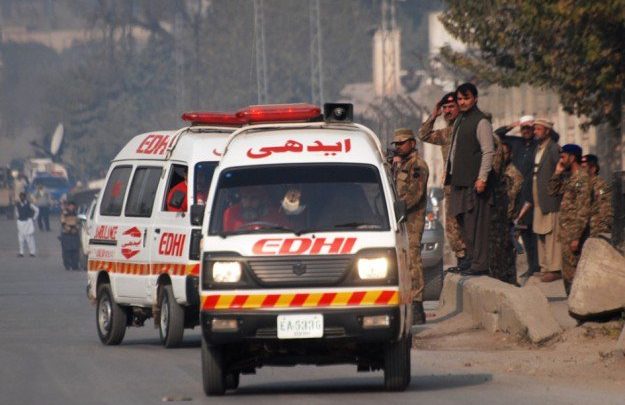 NOWSHERA/LAKKI MARWAT: Four people, including a police sub-inspector, were killed in separate incidents in Nowshera and Lakki Marwat districts of Khyber Pakhtunkhwa on Wednesday, police said.

Police sources said Inspector Jehanzeb Khan was at the Elite Centre Nowshera for Operational Command Course and he was missing since Wednesday morning and his mobile phone was also switched off. In-charge of Khweshgi police post Sub-Inspector Jehanzeb Khan said the body of Yar Muhammad was found on Charsadda Road in Khweshgi Payan near Shah Sawar Chowk.

Sub-Inspector Yar Muhammad was shot dead by unidentified armed men and his body also bore torture marks. The body was handed over to heirs after post-mortem at District Headquarters Hospital.

In first incident, armed men on a motorcycle shot dead a person, Saifullah, who was coming back after cutting the wheat crop, in the jurisdiction of Lakki Police Station. One hour after the incident, the accused also shot dead two nephews of Saifullah identified as Saud and Masood.

The bodies were taken to hospital for post mortem.

Local sources said Aqal Nawaz, who owned a car bargain, was going home in Ghulam Khan when he was stopped by unidentified armed men who snatched Rs500,000 cash from him. The robbers opened fire on Aqal Nawaz when he offered resistance, leaving him critically injured. He was taken to district headquarters hospital for treatment.

Meanwhile, a huge quantity of explosive material was found from a vehicle in Mardan and two suspects were arrested.

Police on a tip off stopped a car in Rustam area and upon search recovered 75 kilograms explosive material, 500 metres prima cord and 28 detonators. Two accused were also arrested and they were shifted to an undisclosed location for interrogation.

Police said the explosive material could have been used in some sabotage activity and by recovering it a massive terror bid has been foiled.