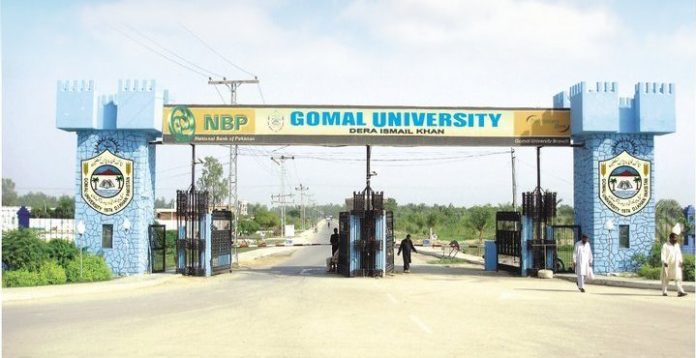 According to a notification issued by the university administration, on the instructions of Khyber Pakhtunkhwa Governor Shah Farman, who is also Chancellor of the public sector universities, an inquiry committee was formed to probe complaints of sexual harassment and financial mismanagement in Gomal University. The committee recommended sacking of the four employees.

The notification of suspension of Director Administration Dil Nawaz Khan on sexual harassment charges was already issued, while former chairman of Linguistics Department Professor Dr Salahuddin was also forced to resign on similar charges which were unveiled by a private TV channel.

The governor has conveyed a clear message to all the universities to correct their state of affairs. He said no hesitation will be made to sack or even send to jail such employees who are playing with the future of students.

After increasing complaints of harassment of students, the administration of Gomal University Dera Ismail Khan has decided that no teacher will be given separate room, and cameras will be installed in all the classrooms and offices.

After the dismissal of Professor Salahuddin, the students of Gomal University have also launched protests against harassment incidents and other problems of the university. After so many complaints and protests, the university administration held a meeting on Tuesday which was chaired by Vice-Chancellor Professor Dr Sarwar Chaudhry.

The vice-chancellor said during the meeting that no teacher will be given a separate room and two or three teachers will use one room, and cameras will be installed in all classrooms and offices to keep an eye on all activities.

The meeting decided to take disciplinary action against those found in defaming the university.

The vice-chancellor said absence of any teacher during class time constitutes a breach of duty which will never be tolerated. He asked all heads of departments to ensure attendance of all teachers. He said absent teachers must be sacked as they don’t deserve to be the part of the university team.

Professor Dr Sarwar Chaudhry said the bio-metric attendance system is being suspended in the university temporarily owing to the threat of coronavirus.