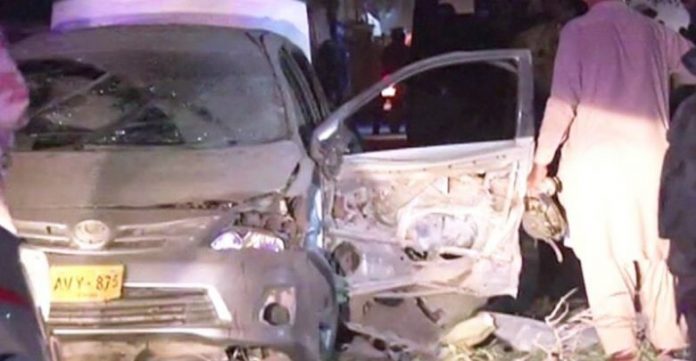 PESHAWAR: Four policemen were martyred and 11 others sustained injuries when a bomb exploded near a police mobile van in Quetta, Balochistan, on Monday.

Police said the incident took place in Mini Market in Satellite Town where the bomb was fixed with a motorcycle. Deputy Inspector General (DIG) Abdur Razzaq confirmed the incident and said the injured include two policemen. The blast site is located near a mosque. The police mobile van was also badly damaged in the blast.

The security forces and rescue teams immediately rushed to the site of the bomb explosion and the injured were shifted to Civil Hospital.

Medical Superintendent of the Civil Hospital Dr Saleem confirmed that four policemen were martyred in the blast. He said 11 wounded persons were brought to the hospital, out of which two were in serious condition.

Emergency was declared at Civil Hospital after the blast and senior doctors and other staff were also called.

In their separate statements, they said those targeting the innocent people in the holy month of Ramazan had nothing to do with religion. They prayed that Almighty All rest the departed souls in eternal peace and grant courage to the bereaved families to bear the loss with equanimity.

The Balochistan CM said efforts are being made to sabotage peace under a wicked conspiracy. He said those creating instability would be defeated with full force. He also directed concerned authorities to provide best medical facilities to the wounded persons.

The blast in Quetta happened two days after a terrorist attack on a five-star hotel in Gwadar district of Balochistan in which five people were martyred and six others were injured.

Three terrorists were also killed in the operation by the security forces. The Inter-Services Public Relations (ISPR) said the martyred included one Pakistan Navy personnel and four employees of the hotel. The injured included two Captains of the Pakistan Army, two personnel of Pakistan Navy and two employees of the hotel. The terrorists wanted to take the guests at the hotel hostage, but timely action by the security forces foiled their plan.