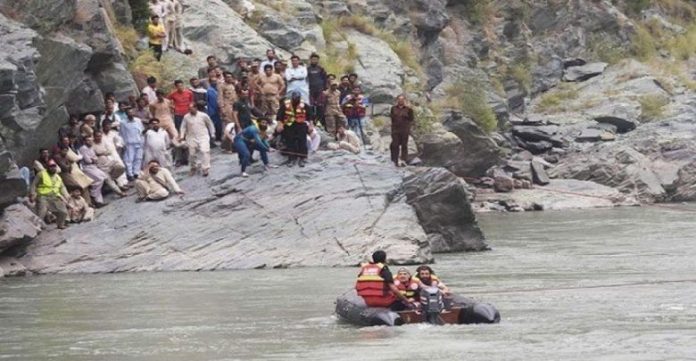 KOHISTAN: Four soldiers of the Pakistan Army, including a captain, when an ambulance fell into Indus River in Upper Kohistan on Sunday.

The DPO said the driver of the ambulance lost control over the vehicle while negotiating a sharp turn on Karakoram Highway and the vehicle fell into Indus River. The other troops in the convoy, policemen and local divers tried their best to pull off the ambulance, but they could not succeed due to strong currents of the river. The DPO was also present at the site of the incident along with Army officers to lead the operation to retrieve the bodies.

Khyber Pakhtunkhwa Information Minister Shaukat Yousafzai expressed grief and sorrow over the accident and said it was a great national loss. The provincial minister said the government shares the grief of the families of the martyred soldiers at this time of tragedy. He prayed that Almighty Allah rest the departed souls in eternal peace and grant courage to the bereaved families to bear the loss with equanimity.

In a separate incident in Mansehra district, a car plunged into a ravine in Lassan Nawab area in which a woman lost her life and three other persons sustained injuries.

The area people reached to the site of the incident and took the injured person to the King Abdullah Teaching Hospital in Mansehra. Doctors at the hospital pronounce one of the injured as dead. The other injured persons were shifted to Ayub Medical Complex in Abbottabad due to their critical condition.

Most of such unfortunate accidents happen in mountainous areas of Khyber Pakhtunkhwa due to poor condition of roads.