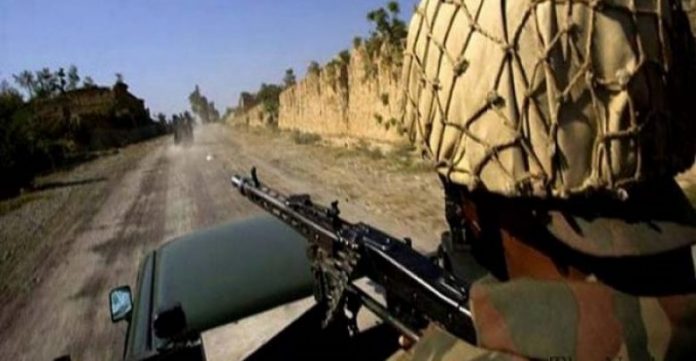 PESHAWAR: Four security men were martyred while eight others injured in two different attacks in district North Waziristan on Monday. The first attack was made in Manzar Khel area in Razmak, where the terrorists ambushed a search party, as a result, three soldiers were martyred.

Early this morning, in another attack, unknown men opened fire on searching party of security forces in Kharr Qamar area of Data Khel. As a result, a security man embraced martyrdom while three others were injured.

The official sources said the terrorists have targeted a vehicle of the search party, however, the attack was repulsed with full forces, as a result, the terrorists escaped from the spot. The security forces have cordoned off the area and started search operation. The officials further informed that after the attack, the security forces rushed to the spot, an shifted the injured to the hospital.

Security sources informed that attack was made in Kharar Qamar area of Data Khel in which Sepoy Asif died on the spot while Sepoy Fakhar, Arsalan and Waqar was injured.

Five days ago, three security forces men were martyred in cross border attack by terrorists along the Pak-Afghan border in Alwara area of North Waziristan.  The ISPR has said that a group of sixty to seventy terrorists from across the border attacked Pakistani troops undertaking fencing effort along the Pak-Afghan border inside their own territory. In exchange of fire three soldiers Lance Naik Ali, Lance Naik Nazeer and Sepoy Imdad Ullah embraced martyrdom, while seven others got injured.