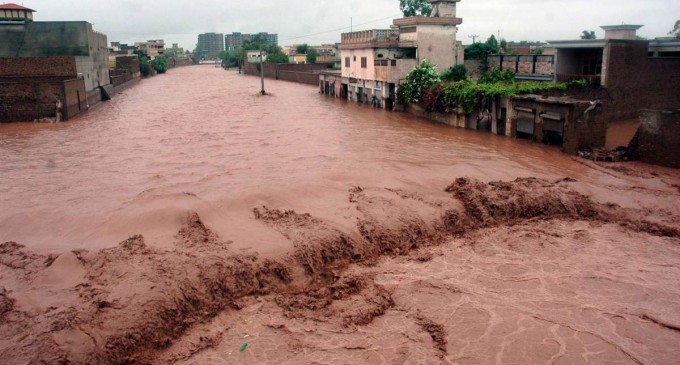 KARAK: Six people drowned as they were washed away by flash flood in Takht Nasrati area of Karak on Saturday, local sources said.

The sources said those who drowned include four women and two men. The police with the help of local people retrieved the bodies.

The sources said that people were collecting wood in the floodwater when they were washed away by a strong flood. People in many parts of Khyber Pakhtunkhwa often go to different rivers and nullahs after heavy rains to collect wood from the flood water, but this practice often results into tragic happenings.

Rain continued to lash some parts of Khyber Pakhtunkhwa on Saturday.

During the next 24 hours, isolated heavy falls may generate flash flooding in Battagram, Torghar, Shangla and Mansehra districts, while land sliding in the vulnerable areas of these districts cannot be ruled out.

The relevant authorities have been directed to take necessary measures amid rains and threat of flooding and land sliding.

Highest maximum temperature was recorded in Pattan with 43 degrees centigrade.

According to a report of the Provincial Disaster Management Authority (PDMA) on Monday, at least 13 persons lost their lives, while 29 others were injured across KP during previous spell of torrential rains.

The PDMA report was based on the devastation caused by floods and rain-related incidents in all the districts of the province. Those died included five children and a woman. Three deaths were reported from Buner, three from Shangla, five from Mansehra and one each from Abbottabad and South Waziristan.