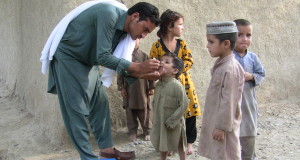 PESHAWAR,12 July:Emergency Operation Center (EOC) FATA Coordinator Shakeel Qaidr Khan has said that missed children and children of repatriating families coming from Afghanistan or from the TDPs’ camps in Pakistan will be strategically accessed to ensure vaccination of every child every time. He said this while presiding over a high level meeting held at EOC FATA on Tuesday.

According to a handout, the meeting was conducted to analyze the situation and reasons that caused recent polio case in South Waziristan Agency. Priorities were discussed for the upcoming polio campaign planned for late July, 2016.

EOC Coordinator Shakeel Qadir Khan while referring to the recent polio case from South Waziristan said  “this case surfaced in unique circumstances but we will not allow recurrence of such a situation again.” He advised EOC FATA team to make all out efforts to reach and vaccine every child and focus on identifying and accessing missed children.

Deputy Team Leader Polio, WHO Dr. Abidi Islam said that recent polio case in South Waziristan Agency should not discourage EOC FATA team including Agency Staff members as FATA is lying between Afghanistan and Khyber Pakhtunkhwa region that have been facing outbreaks in previous months. He said quality of campaigns in FATA is much better; and if compared with other provinces, FATA team is competing with Punjab in maintaining the quality of anti-polio vaccination campaigns.

Deputy Polio Chief UNICEF Jalpa Ratna said EOC FATA has a strong team and appreciated its efforts for keeping FATA polio free during past 7 months. She said it is important that challenges are put on the table for solutions. She said better coordination among PEI partners and strong monitoring can help sustain the existing high quality of polio vaccination campaign in FATA.