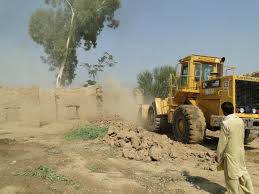 BARA, 17 July: The political administration of Khyber Agency has demolished 43 houses of illegally residing Afghan refugees in the area.

Naib Tehsildar for Malagori Shakeel Barki said the illegally residing Afghan refugees in Khan Killi area were given three-day deadline to vacate the area. He said 39 Afghan refugee families have left Malagori area so far and went back to Afghanistan. He said the security forces have started operation against the unregistered Afghan refugees after expiry of the deadline and 43 houses have been demolished so far.

Notices have also been issued to refugees residing in Jabba, Ghundi and other areas in Jamrud sub-division of Khyber Agency to leave the area.