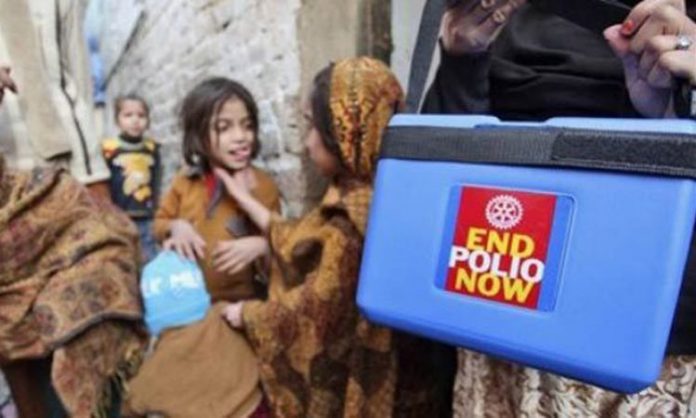 According to a statement issued from the office of the deputy commissioner, the sacked workers include 41 area supervisors and 407 community health workers.

The deputy commissioner was briefed in detail about the recent polio vaccination campaign and those workers who did not perform duty during the drive. The deputy commissioner issued orders for immediately sacking the absent workers. He said polio can be eradicated from Peshawar through joint efforts. He said everyone will have to play role for achieving the goal of polio-free Peshawar. He said no concession will be made with those who did not attend their polio vaccination duty.

Meanwhile, Commissioner Peshawar Division Amjad Ali Khan said while addressing a seminar in Peshawar that the polio vaccination drops were found to be safe during laboratory tests.

Amjid Ali Khan said although many children were brought to different hospitals on Monday after consuming polio drops, but none of them showed any signs of adverse reaction. He urged the religious scholars and elected representatives to play their role in countering negative propaganda against the vaccination campaign and remove misconception of people. He said it is the duty of the government to ensure provision of polio vaccination to every child to save him from the crippling disease.

Deputy Commissioner Muhammad Ali Asghar also spoke on the occasion and mentioned that 448 polio workers have been sacked in Peshawar over dereliction of duty in the vaccination campaign. He said no compromise will be made on health of the children and crackdown will continue against elements speeding negative propaganda.

The recent vaccination campaign suffered massive setback in Khyber Pakhtunkhwa, particularly in Peshawar, after rumours spread about adverse reaction of the vaccine. Hundreds of children were brought to hospitals by panicked parents, but it was found later on that there was no adverse reaction as such and no death occurred due to polio vaccination.