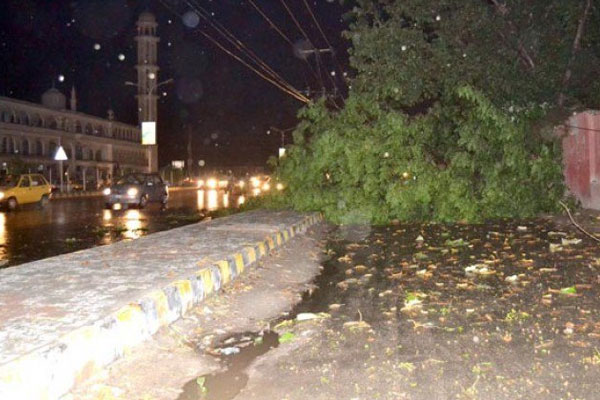 PESHAWAR, 27 April: As many as 46 people died while 150 were injured as windstorm, followed by downpour, wreaked havoc in three districts of Khyber Pakhtunkhwa last night.

The torrential rain also badly affected standing crops and orchards. Peshawar district administration said that a number of houses were razed to ground, killing dozens of people. The injured were shifted to Lady Reading Hospital, Khyber Teaching Hospital and Hayatabad Medical Complex. Emergency has been declared in all the hospital of the provincial metropolis.

Peshawar Deputy Commission Riaz Mehsud has said that relief work is in progress though there are some problems to clear the roads of fallen trees and power pylons.

Following directions of the Pakistan Tehrik-i-Insaf chief Imran Khan, the Khyber Paktunkhwa government has called in Army to help the provincial government in its rescue and relief efforts.

The provincial government has announced Rs 500,000 each for those who died in the natural disaster.

According to Met Director Muhammad Hanif, the main reason behind windstorm in Peshawar is due to the deforestation and pollution.

Prime Minister Nawaz Sharif and Chief Minister Pervez Khattak have shown their profound grief over the loss of lives in Khyber Pakhtunkhwa.