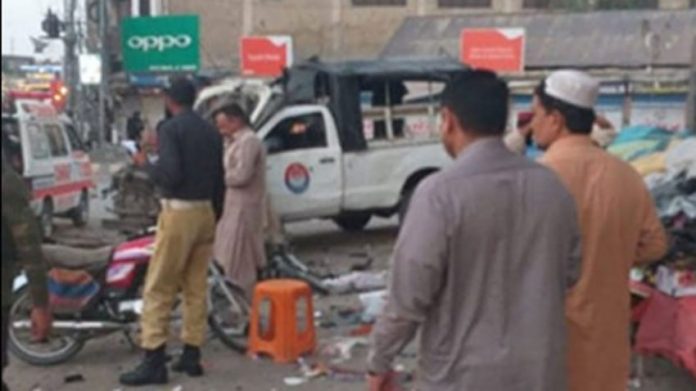 PESHAWAR: At least five persons, including two policemen, were martyred in a tragic bomb attack in Quetta’s Meezan Chowk on Tuesday. A total of 34 persons were also injured in the bomb blast which was apparently aimed at the police station.

Among the injured are also four policemen, including additional Station House Officer City Police Station Shafaat Ali, who were rushed to hospital in Quetta city. Immediately after the blast, the Deputy Inspector General (DIG) of Police Abdur Razzak Cheema and Balochistan Home Minister Zia Lango visited the area. They informed the media that still they are not sure about the nature of the blast.

Police have launched an investigation into the attack. On the other side, Tehrik-e-Taliban-Pakistan (TTP) Pakistan has claimed responsibility for the attack. The group’s spokesperson Muhammad Khurasani said in a message that the City Police Station SHO vehicle was the target of attack.

The blast shattered the glass windows of nearby shopping malls and shops. The sound of the explosion was heard far and wide, causing panic among the people. The City police station is located near Bacha Khan Chowk area of Quetta. It is one of the busiest neighbourhoods of the city. Security officials have cordoned off the site of the blast.

On July 23, At least two people were killed and 16 others injured in an IED blast on Quetta’s Eastern Bypass area. A total of 119 people — including 15 police personnel — were killed and 114 injured in terrorism-related incidents in Balochistan during 2018. As many as 25 terrorists were killed in encounters and 55 arrested in 1,245 intelligence-based operations (IBOs) in the province.